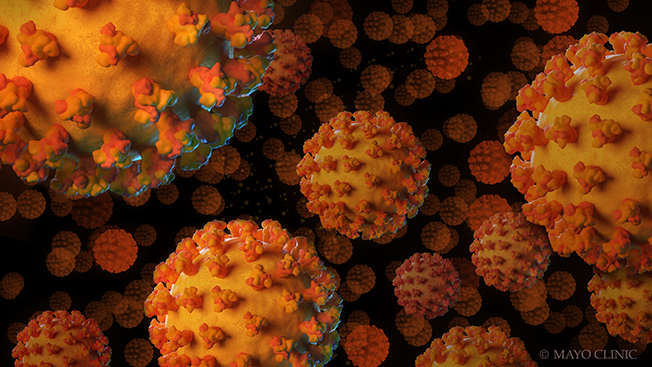 Two years ago on Dec. 12, a group of people were infected and sickened from a virus that had never been known to infect humans. SARS-CoV-2, the virus that causes COVID-19, has spread around the globe, causing more than 267 million cases of infection in these two years of the pandemic, including 49 million cases in the U.S. Within each host as the virus spreads, the viral genome changes or mutates. This genetic alteration, called mutagenicity, can affect how easily the virus spreads, the severity of COVID-19 once infected, or the level of immunity from a vaccine or prior infection. The most concerning changes are tracked as they become more prominent in different geographic regions of the world. Researchers and clinicians keep an eye on these variants — like delta or omicron — so they can figure out how the mutations in these variants affect testing or patient care.

One crucial point, researchers say, is that prevention of infection works, regardless of the variant. The vaccines reduce and prevent hospitalization and death based on current knowledge. If you can get vaccinated or get a booster, do it now.

But what about these variants? Why do they show up, and how?

A virus reproduces by copying its genetic code and forming new virus particles to infect as many host cells as possible. In the case of SARS-CoV-2, the virus stores its genetic code as RNA. It prioritizes the speed of copying over accuracy, and mutations can show up in each round of replication. From the time of infection through the first few days, SARS-CoV-2 particles may double in number about every six hours.

As that RNA replication happens, errors are made.

These errors are called mutations, and if they change the virus in ways that help it spread or infect cells, it can lead to a new strain of virus, called a variant. Mutations in the viral genome, especially to the instructions for spike proteins that help SARS-CoV-2 infect cells, can result in a viral particle that is better at avoiding the immune system, resistant to previous drug treatments or one that can infect cells more efficiently. But other copying errors may hurt the virus's reproduction or have no effect at all.

Eventually, unless precautions are taken, an assortment of viral particles spreads to the next host where the virus gets to try again.

"You get infected by a population of viruses," says Richard Kennedy, Ph.D., an immunologist and co-director of Mayo Clinic's Vaccine Research Group. "Each individual virus could be different from the others because mutations happen at random locations."

With millions of SARS-CoV-2 infections, scientists will likely see most of the options for mutations, writes Mayo Clinic infectious diseases specialist Andrew Badley, M.D., in a recent publication. He is chair of the Mayo Clinic SARS-CoV-2 COVID-19 Research Task Force, which oversees Mayo Clinic's COVID-19-related research activities. In the commentary, Dr. Badley notes that it essential to screen for and collect information about these mutations, and evaluate their impact on how efficiently the virus spreads, how sick they make people, and whether the new variants resist current treatments and experimental therapeutics for COVID-19.

Reassuringly, to date, none of the variants have developed resistance to current therapies and vaccines.

Researchers track the changes to the SARS-CoV-2 genome through positive COVID-19 samples collected for surveillance or testing, and they share that information in a public database. The mutations are identified through a process called sequencing, where viral RNA is examined to determine its genetic makeup. Then the sequence of the potential variant is compared to the original sequence in the database. This helps show how the virus is changing over time — in essence, creating something like a family tree.

Not all mutations worry scientists — remember, some show up and then die out if they don't help the virus spread. But some help it spread directly or indirectly. As part of the immune response, the body makes a variety of antibodies, all of which bind to a small piece of viral protein. If the virus mutates, the protein made from those instructions might change enough that the antibody can't bind to it or binds less tightly. And that, writes Dr. Badley, could reduce or nullify beneficial effects of therapies that rely heavily on antibodies: monoclonal antibodies therapies and, to a certain extent, vaccination.

Equally important are the mutations at sites used in molecular diagnostic tests, writes Joseph Yao, M.D., Mayo Clinic microbiologist and expert in diagnostic testing Those changes could decrease the accuracy or precision of these tests, making it harder to detect these infections. And that will indirectly lead to the spread of SARS-CoV-2.

One thing is for sure, says Dr. Kennedy. If infections continue, mutations will continue and variants will continue to pop up across the globe. They might arise through increased spread of infection in populations without access to or with poor uptake of vaccines. Variants might replicate in a nonhuman host for a time and then be reintroduced to the human population. Or, since the virus is always mutating in a host, a new variant might arise from an infection that continues long term, accumulating mutations in hosts with a compromised immune system.

Currently, there are seven variants researchers around the world are tracking. Two variants of the original alpha strain with mutations that could affect levels of human disease and that have caused COVID-19 clusters are lambda and mu. Five that have reached global health concern status are: alpha, beta, gamma, delta and the newest, omicron. The omicron variant, unlike those before it, did not directly develop from a more recent variant. Some scientists say it may have been spreading under the epidemiological radar since mid-2020.

The known effects of variants are a potential increase in transmissibility of the virus, even to the point of reinfection of those who are vaccinated or have recovered from a previous SARS-CoV-2 infection. New variants may increase hospitalization and death, or infect either younger or older people than previous variants. They also may require additional tests, writes Dr. Yao, including sequencing of the viral genome more often to maintain surveillance on the variants and ensure the current diagnostic tests remain accurate.

Regardless, Mayo's experts agree: prevention is worth a pound of cure.