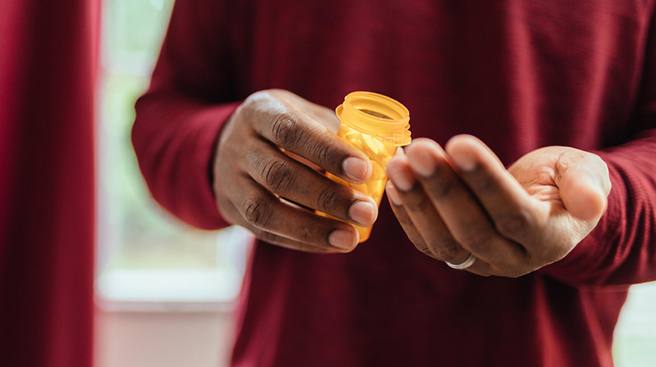 COVID-19 pills may limit severe disease, but vaccination is still the best option.

Over the past two months, data on two pills to treat COVID-19 became public, and scientists say there's reason to hope these treatments will reduce hospitalizations and death from COVID-19. Both work to stop the SARS-CoV-2, the virus that causes COVID-19, from copying itself, but these pills focus on different mechanisms to achieve that goal.

Both have been called game-changers, but how do these investigational new drugs fit into the game? And what is the overall game plan anyway?

"The SARS-CoV-2 virus was identified less than two years ago, and very rapidly, we were able to understand the molecular biology of how the virus works, and clone and study the virus's genes," says Dr. Badley. "One of the genes that the virus encodes is a protein called SARS-CoV2 protease, and with computer-based technology, scientists could understand how that protease gene works, what the protein looks like, and do what's called molecular dynamics simulation, which is a computer-based way to come up with a drug that should block the protease enzyme."

And that's what was done, says Dr. Badley.

Scientists looked at a variety of compounds and hit on a few to try. The lead compound was refined and tested, eventually yielding a highly optimized version effective at preventing the virus from replicating. It was tested, shown not to be toxic, and started in clinical trials.

"That same basic approach was used 25 years ago to come up with HIV protease inhibitors, which had worked very, very well and revolutionized the care of HIV," says Dr. Badley, who is an infectious disease specialist researching HIV. "At that time, the process took several years. Now in the era of COVID, with advances in biology and computer-aided design, that same process took less than two years to create a highly effective SARS-CoV-2 protease inhibitor."

That protease inhibitor is a combination of a new drug and the antiviral ritonavir, which prevents the new drug from being broken down too quickly. This new investigational oral antiviral candidate entered clinical trials and in a Nov. 5 press release, Pfizer Inc. reported the results from a planned, early analysis of 1,219 adults at high risk for poor outcome after SARS-CoV-2 infection who were diagnosed with COVID-19 and entered the study within three to five days of symptom onset.

The data showed the people in the group receiving the drug candidate had an 89% reduction in the risk of hospitalization or death related to COVID-19, as measured after 28 days in the study. Pfizer has since petitioned the Food and Drug Administration (FDA) for emergency use authorization of the drug. On December 22, 2021 the drug paxlovid was approved for emergency use in patients 12 years of age and older who at high risk for severe COVID-19.

Another oral antiviral drug for COVID-19, introduced by drugmaker Merck & Co. Inc. in October via a press release, is molnupiravir. This drug is named in honor of Thor's hammer, Mjolnir.

Merck reported the results of a planned, early analysis of 775 adults at high risk for a poor outcome after SARS-CoV-2 infection who were diagnosed with mild or moderate COVID-19 within five days of entering the study. The people in the group receiving molnupiravir had half the number of hospitalizations and half the number of deaths at Day 29 after entering the study. A release of the results from the full study indicated that risk was reduced to 30% and varied by patient subset. Merck petitioned the FDA for emergency use authorization Oct. 11 and an FDA advisory panel voted to recommend emergency use authorization for molnupiravir on Nov. 30. Molnupiravir was approved for emergency use on December 23, 2021.

The pill was formulated based on knowledge of how RNA viruses copy themselves, and scientists designed a molecule to block that process. Called a "ribonucleoside analog," it is a nitrogen-containing base with the sugar ribose. When the pill is swallowed, it breaks down, and the ribonucleoside creates a substance that garbles the RNA copying process. It does this by jamming the copy machine, an enzyme called RNA polymerase. This one is a little more complicated, says Dr. Badley.

“Because molnupiravir targets the RNA building blocks, it inhibits replication of multiple different viruses other than SARS-CoV-2," he says, adding that more research into the wider effects of the drug are needed.

Stick to the Plan

If these findings pan out, either in clinical trials or as they are used under an emergency use authorization, Dr. Badley says these players could limit severe disease. In the meantime — and in general — the best options, says Dr. Badley, are the ones in play right now.

"The way that we will overcome COVID requires three things. One is everybody get vaccinated who can be vaccinated. Number two is if you think you have a COVID infection, get tested and get tested quickly. If you test positive, isolate to avoid spreading infections to others. And the third is get treated early. When you get treated early, you yourself get less sick. But also, there's emerging evidence that suggests you're less able to spread the virus to others."

One thing he emphasizes is that these pills are not a replacement for vaccination.

"Ben Franklin once said that an ounce of prevention is worth a pound of cure. Never has that been more true than in the era of COVID," says Dr. Badley. "The approved vaccines are safe and effective at preventing infection, and even if you become infected after a vaccine, you are less sick than if you were not vaccinated. The new pills for COVID are not a replacement for vaccination, and are only for people who are at high risk of complications, in order to prevent hospitalization and death."