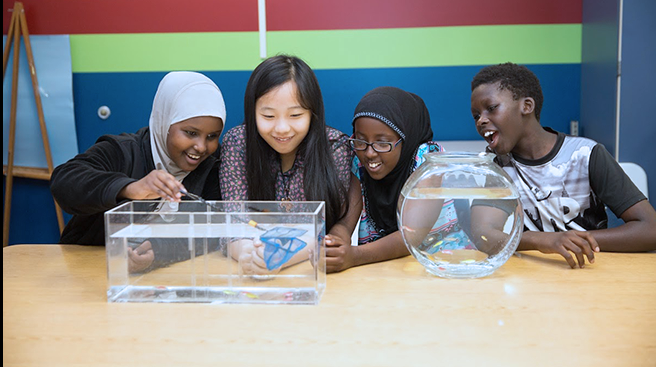 The microscope hovers over a small dish. It's attached to a laptop, so students don't need to press their faces against a microscope eyepiece. On the screen is a zebrafish egg. On hand to answer questions are scientists. The questions, however, are a little different from the ones they get from colleagues.

"One of the questions I got was how does gravity work, and I was like, 'Oh that's a great question," says Hirotaka Ata, M.D., Ph.D., one of the volunteer scientists. "I talked about how everything has a little bit of a pull, but the bigger it is, the stronger the pull. I don't know what they took away from it because they're second graders, but I figured they know about the planets and things like that."

The second graders in question were taking part in a lesson on the zebrafish life cycle. And, no, in second grade, it's not a huge leap from fish to gravity. The lesson is part of the Integrated Science Education Outreach program started as a collaboration between Mayo Clinic, Winona State University ― Rochester and Rochester Public Schools. It brings experiential science lessons and scientists to the classroom with the goal of making science fun and interactive so in the future, there are more scientists and more scientists from diverse backgrounds.

"We need more scientists from underrepresented populations because the complexity of the problems hitting us as a community require more minds, ideas and perspectives," says Chris Pierret, Ph.D., a scientist at Mayo who coordinates the program. "Trying to find new voices in science isn't just the right thing to do. It's the only possible solution."

Get Ready for Anything

On this day in early 2021, the volunteers are all from Mayo Clinic. They are one of the few approved visitors to the school during the pandemic and are taking all the required precautions. Dr. Ata is a student in Mayo Clinic's M.D.-Ph.D. Program (he has since left Mayo for a residency on the East Coast). The others study nephrology, orthopedic surgery or radiology. Two are here to help out in the Spanish-speaking immersion classroom. Michael Ekker, the in-school organizer, helps orient new volunteers to where the students are in the lesson, telling them more about the zebrafish embryos.

"They've grown up enough today so that they look like fish," Ekker says, pointing out the eye and the tail. Through the weeklong program, the students look at the fish every day, drawing and discussing how the eggs mature. But one of the most important long-term aspects of the program is that the kids get to interact with a scientist.

"Get ready for anything and everything," Dr. Ata says as the volunteers wait to go into the classroom. "Another question I got was, "Do you guys ever go back in time," he says, clearly worrying the other volunteer. But it was fine, he said, and he told the kids that while they can't go back in time physically, scientists can use the layers of the ground to find out about the past.

"And then they dove into dinosaur bones and all that kind of thing," Dr. Ata says.

The program, often abbreviated to InSciEd Out, began in 2008 and received funding in 2009 from Mayo Clinic's Center for Clinical and Translational Science (often shortened to CCaTS and pronounced as "see-cats"). The center is a hub for advancing research, especially efforts that are developed in collaboration with communities that could benefit from the research results.

"InSciEd Out began as a partnership with schools and educators, trying to open up the pathway of science to more students," says Dr. Pierret. "As we did so, we realized we were interacting with the community in a way that brought folks forward and in a way that CCaTS has been trying to do through community engagement and through special populations. So it became a very natural partnership for CCaTS."

They started in the Rochester, Minnesota, school district. After gathering a few years of data, scientists from Mayo published a peer-reviewed article in the journal Zebrafish. They defined the program goal as improving science proficiency in the local school system through the power of partnership, writing, "Put simply, teachers are not asked to run a laboratory, and scientists are not asked to manage a kindergarten classroom." Instead, they write, scientists and teachers contribute their individual expertise to improve science education.

In one of the four classrooms, the kids are grouped around the laptop.

As the students observe the zebrafish lifecycle, they draw what they see on the computer screen. After everyone has had a chance to draw, the scientist leads them through the process of comparing the pictures. She asks, "Does the image look different today than yesterday?" And "Why do you think it changed?" The discussion ranges from how a single cell becomes something like a spine or an eye, to the role of the brain in the body. Then a student asks if the fish will be grown up by tomorrow. The teacher reminds the student of the life cycle, and then the scientist asks, "How long do you think zebrafish live?"

"Ok, so how old are the oldest people you know?" she says.

"One-hundred," says one student. "One-hundred and ten," says another one.

The teacher breaks in, "We're not going to be silly," and the next chorus includes numbers in the 60- and 70-year-old range.

"So if dogs don't live as long as humans," asks the scientist, "then do you think fish would?"

This experience of critical thinking, associating information to make reasonable deductions is a bonus in the zebrafish life cycle curriculum.

Scientists of the Future

Despite the occasional foray into gravity, the students do learn the objectives set out by the teacher. An added benefit is that the kids are exposed to volunteers that show them that scientists can be anyone.

"All of the research we've seen shows that if students are able to see a role as something done by someone they look like it makes a huge difference in whether they think they could do it," says Ekker.

When asked to draw a picture of a scientist, he continues, most kids will draw someone who looks sort of like Einstein. But after the zebrafish lesson — where volunteers tend to represent the spectrum of ethnicities and gender — the drawings change.

"At the end, you get fewer old white-haired guys in a lab coat," he says. "We're not trying to teach that lesson to them, right? We want it to be kind of passively learned throughout the process."

In addition to Minnesota, InSciEd Out is now present in Florida, Illinois, Puerto Rico, Ghana and India.  They've adapted their programming framework to address infectious disease transmission and mental health, and to support teacher-led research in the classroom.

For more information on the program, visit the InSciEd Out website.