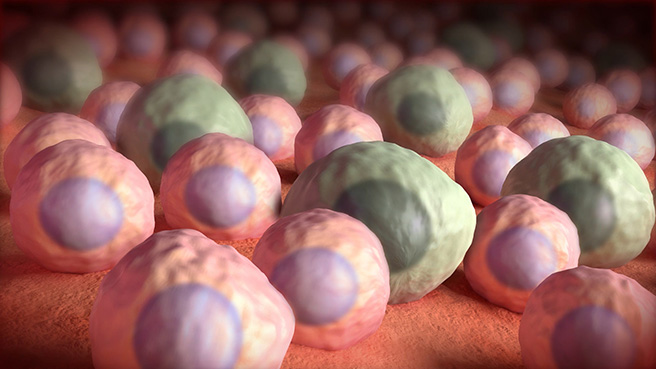 Cells in the body usually do what they’re told. In response to cues, cells divide, grow, shrink or die as needed. But there are some cells that start to ignore the body’s order to expire: senescent cells. Sometimes called "zombie cells" for their undead lingering, senescent cells have triggered the body’s kill command, but instead of dying, they exist in a sort of suspended reality, unable to work properly but actively spewing out toxic chemicals.

Animal studies have implicated senescent cells in conditions of aging ranging from brain dysfunction to osteoporosis, but research on senescent cells and their contribution to poor health is still fairly new. The primary focus has been on senescent cells themselves and how removing them affects disease states. Now researchers are looking at the toxic proteins released by senescent cells, called the senescence-associated secretory phenotype, or SASP. They are examining the effect of those proteins in the environment around the cells (microenvironment) and as they circulate through the body.

In a recent study, Mayo Clinic researchers report that the SASP circulating in the human bloodstream might be a reliable marker for distinguishing who is at risk for age-related diseases as well as poor outcomes after surgery. The article published online June 18, 2020, in the journal JCI Insight. Led by the lab of Mayo researcher Nathan LeBrasseur, Ph.D., a collaboration of colleagues assembled to understand how the toxic factors from senescent cells may mirror biological age and, correspondingly, heightened risk for medical procedures.

“We first developed a panel of approximately 30 senescence biomarkers by examining the abundance of diverse proteins secreted by various types of human senescent cells,” says Dr. LeBrasseur. “We then assessed whether they were detectable in human blood samples.”

The researchers looked for those proteins in blood samples of Mayo Clinic Biobank participants. The 267 samples were evenly distributed in donor sex and age from 20–90.

“We show the circulating abundance of the majority of our biomarkers increased with advancing age,” says Dr. LeBrasseur.

Concentrations of 19 biomarkers were associated with chronological age, and, after adjustments for sex and body weight index, 17 remained. This, the authors write, showcases the importance of these factors on the body and how it ages. They conclude that as different types of senescent cells accumulate with age, they may contribute to a personalized and changing SASP within each person.

In addition to looking at the biomarkers in relatively healthy biobank participants, the researchers also measured the circulating SASP proteins in persons with two distinct age-related conditions requiring surgery: cardiovascular disease (severe aortic stenosis) and ovarian cancer. Dr. LeBrasseur and colleagues examined the associations between biomarkers and an index of frailty, which is a geriatric syndrome linked to increased vulnerability to stress and poor health outcomes after surgery in both groups.

"We observed that several of our biomarkers were associated with the burden of diseases and disabilities, or biological age,” says Dr. LeBrasseur. “Using machine learning, we identified a select group of biomarkers that could be used to predict adverse outcomes, such as complications, intensive care unit admissions and rehospitalizations after surgery for either heart disease or ovarian cancer.”

The authors caution that the study draws from a limited geographic area and may not be generalizable. They also note that the utility of the biomarkers needs to be tested in other surgical indications, such as joint replacement for severe arthritis, which the team hopes to pursue.

“We are eager to replicate these findings in larger and more diverse cohorts,” says Dr. LeBrasseur. “Also, we’re very excited to see how interventions, such as exercise, diet and, in the not-too-distant future, drugs, impact our biomarkers and, in turn, health outcomes. We have strong evidence in animal models for such approaches.”

This study touches on a long-term interest of Dr. LeBrasseur's lab and Mayo Clinic.

“Mayo has been a leader in demonstrating the fundamental role of senescent cells in aging and a host of aging-related diseases and geriatric syndromes,” says Dr. LeBrasseur. His lab has been a part of this effort, trying to answer the question of how researchers can measure biological age and better distinguish between biological age and chronological age.

“Clearly, there are robust and resilient older adults who exhibit very few consequences of aging, and more vulnerable and affected persons of similar chronological age,” says Dr. LeBrasseur. “As age is, by far, the greatest risk factor for the majority of health conditions that Mayo Clinic helps individuals manage, strategies to define biological age can help guide clinical decision-making.”

Also, Dr. LeBrasseur says, as interventions that target the fundamental biology of aging emerge, biomarkers of aging can help us identify individuals who will be most responsive. They also will serve as early indicators of whether the intervention is doing what it is intended to do, relative to measures of physical or cognitive function, for example.

“By better understanding the biology of aging, we have the potential to identify ways to fundamentally transform human health. Strategies to delay the onset of age-related diseases and disabilities would dramatically extend human health span, the period of life free of disease and disability. These efforts are facilitated by the collaborative, multidisciplinary nature of research at Mayo Clinic.”

To read more about immune system aging research at Mayo, click through to, “Aging and Immune Decline: Destiny or Dynamic?”

For a more on how senescent cells contribute to aging, head over to the Regenerative Medicine blog post, "Turning Back the Clock on Aging."

To read more about aging research at Mayo, head over to The Robert and Arlene Kogod Center on Aging at Mayo Clinic.