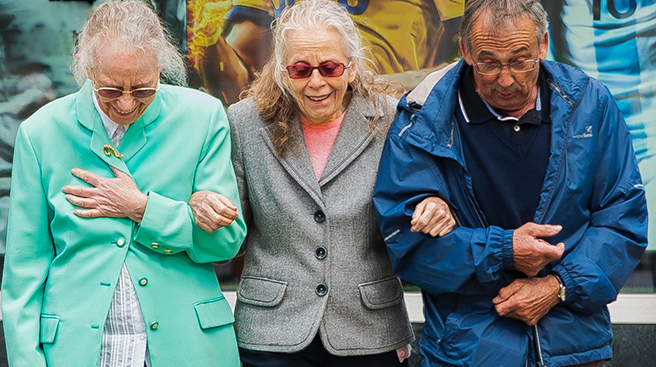 What? Can you say that again? Sorry, I didn't hear you.

These common phrases are linked to a common problem: hearing impairment.

About 28 million, or 14%, of Americans ages 20 to 69 reported hearing impairment in a nationwide survey. Among those older than 75, statistics suggest about half report disabling hearing loss. To compound the problem, the world is now masked to help stop the spread of SARS-CoV-2, the virus that causes COVID-19.

Without the ability to lip-read, and with the muffling of speech that comes from talking through a mask, hearing impairment can be a bigger problem than ever. Issues such as cost and comfort often keep patients from using hearing aids. Fortunately, researchers are working to overcome those barriers so everything comes through loud and clear. One of those researchers is Michael Cevette, Ph.D.

After decades of seeing patients trying to manage hearing loss — and the steep cost of hearing aids — Dr. Cevette decided to create a better, less expensive hearing assistive device to help patients. Dr. Cevette is an audiologist and researcher of the vestibular system and human hearing. He works with colleagues in the Aerospace Medicine and Vestibular Research Laboratory at Mayo Clinic in Arizona.

It isn't an overstatement to say that losing the ability to hear is devastating for many. In a noisy restaurant, one might be willing to ask a speaker once, maybe twice, to repeat the question, but after that, most people will just check out of the conversation. Over time, that can lead to withdrawal from social situations and even a label of cognitive impairment.

"Only about 20% of the people who really need hearing aids get them, and one reason is cost," says Dr. Cevette.

To explore options, the Mayo team partnered with a research group that's been investigating hearing technology for 30 years. They began working together in 2013 and tried many, many iterations. One idea was a tabletop speaker. That was dropped due to problems with squealing feedback. Others prototypes have varied in size, shape and technology, but none worked as well as they had hoped.

"Finally, my colleague, Dr. Mead Killion from Etymotic Research came here, and we went out for pizza," says Dr. Cevette. "We went through all the iterations, and all of a sudden we said, 'Hey, what happens if we just hook it ― if we just hook the system over the ear?'"

So they tried it.

The new device is a universal hearing system that consists of a base that connects individual receivers ― microphones ― together via Bluetooth.

The individual receivers are at the end of a hook that fits over the ear, and the hook is attached to a collar or lapel via a wire to a clip. The system is controlled by an algorithm and specific technology in the electronic microcircuitry to boost higher frequencies. Wearers can hear people who have the other receivers, but they also can hear conversation going on directly around them. Basically, it decreases the cognitive effort required for processing audio input.

"I've never understood what it meant when people say that there is cognitive effort in hearing ― that managing noise causes you fatigue," says Jan Stepanek, M.D., an aerospace medicine specialist, internist and colleague of Dr. Cevette. "Once I put the hearing hooks on, I realized: 'Oh, this is much easier to hear Mike talk. I don't have to battle the white background noise.'"

While it's currently sold for less than a typical hearing aid in the Hearing Aid Center at Mayo Clinic Arizona, Dr. Cevette and the team are looking for a commercial partner. They think they can reduce the price further.

"It really improves clarity of speech," says Dr. Cevette, "even for people who don't have high frequency hearing loss."

And among those these hearing assisted devices have helped are surgeons. In this case, what was made to benefit patients can help clinical staff, as well.

But that communication is confounded by a host of factors. People are focused on their specific task, like keeping a patient asleep or anticipating an instrument. Everyone has a mask on. And staff may be hearing-impaired themselves. There's also music and background noise from machines ― even occasionally power tools. Sometimes a member of the team leaves the room, such as to drop off specimens, and sometimes people just talk to each other.

Dr. Hinni and his team were able to try out the hearing hooks, renamed the "amplified surgical mask." They clipped the receivers on their masks and put the hooks over their ears and, "I loved it," says Dr. Hinni. "I could hear anyone on the team whisper if they wanted to. When the circulator (nurse) went into the sterile core to fetch something, I could say we don't want that drain. We want the other drain. Or while you're there …"

And, he noted, it helped create a more professional environment by reducing nonessential communication. It was also more user-friendly than other technology on the market, Dr. Hinni says, adding, "It creates an environment where the patient can get the best operation possible."

"They were loaners," says Dr. Hinni, who, by the way, would like them back.