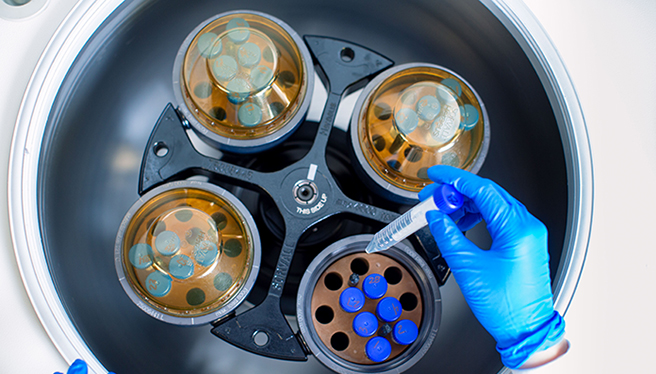 To develop a treatment for patients with COVID-19, researchers around the world are steadfastly exploring numerous angles, including testing existing antiviral drugs and new compounds. One potential treatment that has garnered attention is known as convalescent plasma therapy. The approach involves giving patients an infusion of antibody-rich plasma from people who have recovered from an infection with SARS-CoV-2, the virus that causes COVID-19.

Mayo Clinic is the lead institution providing coordinated access to investigational convalescent plasma for hospitalized patients with severe or life-threatening COVID-19, or those at high risk of progression to severe or life-threatening disease. This national effort will collect plasma from donors who meet several criteria established by the Food and Drug Administration.

The treatment is based on the function of antibodies, proteins created by the immune system that combat invaders to the body in a variety of ways. Some are capable of neutralizing a virus, while others work by mobilizing a range of other immune cells that fight off disease. It's not yet known by which mechanism COVID-19 antibodies might work, but the thinking is that an infusion of convalescent plasma may boost a generalized response, known as passive immunity, until a patient develops a strong, targeted ability to fight the virus.

The idea of a treatment derived from recovering patients is not new. Doctors used serum — plasma with the clotting factors removed — as far back as the 1890s. In fact, serum was the only treatment option for certain infectious diseases until antibiotics were introduced in the 1940s. In 1934, doctors used convalescent serum and successfully halted an outbreak of measles at a Pennsylvania school. During more recent global outbreaks, researchers tested convalescent plasma in small clinical studies and found it had positive effects against coronaviruses that caused severe acute respiratory syndrome (SARS) and Middle East respiratory syndrome (MERS), as well as against H1N1 influenza. However, the very same approach turned out not to be effective against Ebola, a filovirus.

Earlier this year, two separate studies in China sparked optimism, each presenting the use of convalescent plasma in severely ill patients with COVID-19.  One study, published in the Journal of the American Medical Association, described positive results in five critically ill patients who had both COVID-19 and acute respiratory distress syndrome (ARDS). All five patients in the study recovered. The other study, posted quickly online to help the medical community, described a sample of 10 patients with COVID-19 who had received convalescent plasma. That study found patients showed improvement in symptoms shortly after treatment and experienced no severe adverse effects. But the authors of both studies also noted the patient cohorts were small and that some participants had also received other experimental drugs, such as antivirals, making it hard to tease out the precise effect of convalescent plasma.

To researchers around the world, the findings suggested the importance of additional research to address a trove of critical questions. For instance, what's the optimal dose of antibodies? At what point during a patient's illness should treatment be given? Which patients will benefit? The only way to answer these questions will be through large, well-controlled clinical trials, such as those that Mayo will soon be conducting in collaboration with several other academic medical centers.

"We're going back to the future to test this age-old therapy and we're going to do it with the appropriate scientific steps — tracking data, comparing outcomes, giving us insight in real time," says Dr. Joyner.

At Mayo Clinic, experts from all areas — including transfusion medicine, infectious diseases, critical care, and biostatistics — swung into action, bringing their expertise to bear.

The first step will be collecting plasma from recovered patients who are eligible. The FDA has outlined the requirements individuals must meet in order to donate plasma. Blood must be tested for safety and then spun through a centrifugal process to isolate plasma and its essential components. A single donor must have high enough titers of antibodies in order for an infusion to be effective, so one essential tool will be a serological test, such as the test studied and validated by the Elitza Theel, Ph.D., director of the Mayo Clinic Clinical Microbiology Laboratory. Researchers believe each donor may provide enough antibodies for the treatment of perhaps two to four patients.

Physicians at any institution who are treating hospitalized patients with COVID-19 may register their patients' information at uscovidplasma.org. The national program is supported by the American Red Cross and the larger blood-banking community, which will work with physicians to collect and distribute the donor plasma.

The immediate hope in the current pandemic is that convalescent plasma may be effective in treating people with the most severe disease. This treatment also may prevent people who are only moderately sick from getting sicker.

"We hope to be able to provide a tool for doctors and nurses on the front line," Dr. Joyner says. "And we hope it will have a disease-modifying effect."

Researchers at Johns Hopkins Bloomberg School of Medicine led by Arturo Casadevall, M.D., Ph.D., the driving force behind the convalescent plasma movement, will also be conducting trials to learn whether an infusion of convalescent plasma can prevent COVID-19 in people with underlying medical conditions, and others who are at high risk, such as family members who have been exposed to COVID-19 and health care providers. This will be helpful in case there's a second wave of COVID-19 later in the year, as happens in many viral outbreaks.

"We've been able to spring into action quickly, to work with the FDA, and to establish connections with partners so that we'll have access to information in real time. As we learn more about the use of convalescent plasma right now, we'll be even better prepared for what comes ahead," Dr. Joyner says.