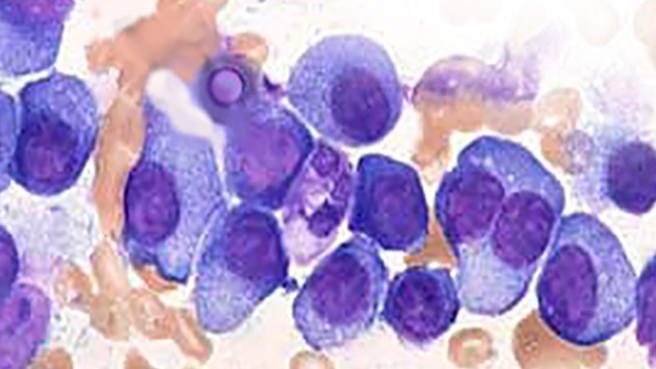 In the quest to turn laboratory breakthroughs into new cancer treatments, much can be lost in translation. Only a fraction of “eureka moments” result in a beneficial remedy. The disease models used to test potential therapies are a major stumbling block. Many cancer drugs fail clinical trials because a lab model – usually a mouse -- wasn’t able to accurately mimic disease processes in humans.

Scientists face a paradox. Cancer starts when a single cell randomly changes. Specific genetic and environmental factors play a role in tumor development, but not every individual with those factors will get sick. How can cancer’s randomness be scientifically modeled?

Mayo Clinic researchers have figured out how, with the development of a mouse model of multiple myeloma, the second most common blood cancer in the United States according to the National Cancer Institute. Although treatment can control the disease, there’s no cure. But until one is found, Mayo’s mouse has paved the way for new multiple myeloma clinical trials to improve treatment for patients.

“Our model is faithful to what actually happens in the development of tumors in human disease,” says Marta Chesi, Ph.D., a biochemist and molecular biologist at Mayo Clinic in Arizona. “We can now rapidly screen compounds in our mouse to prioritize which drugs should enter clinical trials. Based on data from our model, clinical trials of new potential drugs are already underway,”

Multiple myeloma forms in the plasma cells of bone marrow. It almost always starts as a relatively benign condition known as monoclonal gammopathy of undetermined significance (MGUS), which was originally identified at Mayo Clinic. According to federal statistics, about 3 percent of people over age 50 in the United States have MGUS; every year, about 1 percent of people with MGUS develop multiple myeloma or a related cancer.

“We’ve made a lot of progress in recent years. But even now, myeloma usually recurs after treatment. We’re still looking for new and better therapies,” says Leif Bergsagel, M.D., an oncologist whose cancer genetics laboratory is on Mayo’s campus in Scottsdale, Arizona.

“We can now say there is a 90 percent chance that a drug that doesn’t work in the model will be inactive in humans. On the other hand, if a drug works well to eradicate tumor in the mice, there is a 70 percent chance the drug will also work in human patients,” Dr. Chesi says.

That’s valuable information for guiding decisions about which drugs should proceed to clinical trial. “It’s almost unheard-of in cancer to have a model that is this predictive,” Dr. Bergsagel says. “For patients, it’s very helpful not to have to go through treatment with drugs that have a low likelihood of working.”

Unlike some lab models, the mice used in Mayo Clinic’s multiple myeloma model have functioning immune systems, making it a transgenic model. This allows researchers to capture complexities in the interaction of cancer and the immune system, thereby reflecting variability in the disease process.

“It takes about two years for the mice to develop tumors, which is very slow relative to the mouse life span. During this time, we can replicate the process of tumor-cell evolution observed in humans, and the crosstalk between tumor and the immune system,” Dr. Chesi says. “We see a spectrum of differences—some mice develop the multiple myeloma tumor, are resistant to therapy and die rapidly, while some have a more indolent tumor and live longer. No two mice are identical.”

The breakthrough that led to development of the transgenic model involves a gene known as MYC. Activation of that gene turns out to be critical to the development of multiple myeloma. The Mayo Clinic scientists managed to incorporate sporadic activation of MYC into their model, by exploiting a natural process — somatic hypermutation — that occurs in immune cells when they mobilize against a foreign molecule, such as cancer.

The MYC breakthrough was doubly significant. Before Mayo Clinic’s transgenic myeloma model, MYC dysregulation was known to cause many cancers, but not multiple myeloma. MYC’s role in multiple myeloma was a serendipitous discovery that occurred when the Mayo Clinic scientists tested their ability to use somatic hypermutation to turn on gene expression.

“We wanted to make sure the system worked with a control gene, before using the system on other genes we thought would cause myeloma,” Dr. Chesi says. “We chose MYC, thinking the mice would develop Burkitt’s lymphoma, one of the prototypical cancers caused by MYC.

“To our great surprise, the mice developed myeloma instead,” she says. “That led us to look very carefully at the genomes of myeloma patients. We found that 50 percent of them had rearrangements not previously seen in the MYC locus, causing its dysregulation. Because of the mouse results, we learned that MYC causes myeloma.”(Cancer Cell, 2008)

With its functioning immune system, the mouse model is able to test some of the most promising new multiple myeloma treatments, such as checkpoint inhibitors and CAR T-cell therapy. These immunotherapies work by revealing cancer to an individual’s immune system.

“We cannot test these news therapies the old-fashioned way, with immune-suppressed lab models. But our transgenic mouse can see if an immunotherapy attacks the tumor cells,” Dr. Chesi says.

The drug LCL161 has been known to attack a protein found in certain cancer cells. But it seemed an unlikely weapon against myeloma because the protein targeted by the drug reduces myeloma tumor growth and myeloma cells often delete that protein in an effort to further their expansion.

“We thought that treating the mice with LCL161 would just make the tumor grow faster,” Dr. Chesi says. Nevertheless, the researchers went ahead and tested it in the lab model.

“We saw remarkable activity. After two weeks of treatment, multiple myeloma disappeared from the mice,” she says. “Basically, we cured all of them.”

Surprised, the researchers removed tumor cells from the mice and exposed the cells to the drug in a lab dish. “As we had predicted, there was no effect. The drug was not targeting the tumor cells,” Dr. Chesi says. “But we started to think that maybe this drug was targeting the model’s immune system—activating it somehow so it could attack the tumor.”

Having a transgenic mouse model allowed the researchers to test that hypothesis. After many experiments, they concluded that LCL161 activates cells known as macrophages.

“They are basically scavengers that go around and eat tumor cells,” Dr. Chesi says. “We also found that checkpoint inhibitors that have absolutely no activity against multiple myeloma have a remarkable effect, when combined with LCL161.”

As a result, a second trial, combining LCL161 with a checkpoint inhibitor, is also planned. “We don’t have clinical results yet, but we’re excited to see what happens in these trials,” Dr. Bergsagel says.

Trained as a research scientist, Dr. Chesi assumed at the start of her career that her work would center solely in the laboratory. “How wrong I was,” she says.

“At Mayo, basic scientists closely collaborate with clinicians to focus on what is really important—the patients,” she says. “To discover the effectiveness of a drug in the mice, and to know that the work will make a difference for myeloma patients, gives us a lot of satisfaction.”