Diseases of the human body evolve and change, but their effect on patients is fixed.

In a French hospital in 1894, diagnosis of a patient with eye pain, fading vision and tingling limbs may have been neuro-myélite optique aiguë, named as such by Eugène Devic, M.D., a French neurologist.  After 1907, the patient might have had Devic's disease. By the 1930s, the patient may have been diagnosed with a version of MS.

But, now, thanks to a stalwart bit of technology and Mayo Clinic's Neuroimmunology Laboratory, that link between Devic's and MS has been severed. Also, treatment for some autoimmune disorders can now be honed so patients get the right diagnosis the first time and the right treatment faster.

Founded in 1981 by Vanda Lennon, M.D., Ph.D., a Mayo Clinic immunologist and the Dorothy A. Adair Professor of Immunology and Neurology, the lab is currently co-directed by Andrew McKeon, M.B., B.CH., M.D., and Sean Pittock, M.D. – both Mayo Clinic neurologists.

Neuromyelitis Optica
One of the biggest antibody success stories from the Neuroimmunology Lab involved Devic's disease, also known as neuromyelitis optica. When examining the serum and spinal fluid of patients with this disease, Dr. Lennon and team reported in 2004 that autoantibodies were targeting a protein found on brain and spinal cord cells called astrocytes. These cells act as the brain's plumbing system, allowing passage of water in and out via the protein channel aquaporin-4.

“The aquaporin-4 water channel protein is on the outer surface of the astrocyte, so, when antibodies latch onto it, they can cause all sorts of downstream damage,” says Dr. Lennon.

This discovery enabled researchers to classify neuromyelitis optica as a unique disease ─ not a variant of MS as previously thought. It also allowed for development of tests to help physicians rule out MS. For patients, that means getting the correct diagnosis in the early stages of disease.

“It shows you the power of diagnostic-specific antibody tools,” says Dr. Lennon.

And one unusual tool in particular was responsible for the lab's next success.

Seeing Patterns
Lab technology advances in leaps and bounds. So a test from the 1960s may seem out of date to some. But, in the case of immunohistochemistry, it was just the right tool for the Neuroimmunology Lab. 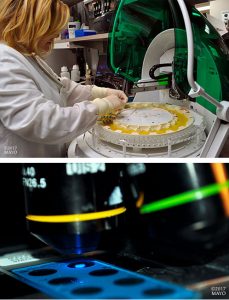 Basically, patient serum or spinal fluid is applied to sections of mouse tissues, tagged with a fluorescent dye and viewed under a florescent microscope. This technique, called immunohistochemistry, enables researchers to see unique patterns of antibodies binding to healthy tissues.

“Immunohistochemistry has been a tremendous tool of discovery as well as a diagnostic tool for the last 35 years since I set up this lab,” says Dr. Lennon, who ran the lab until 2015. “While we certainly use newer molecular techniques, which are important validation steps, we did not give up on the valuable older technology as a component of our 21st-century screening protocol to detect informative autoantibodies.”

Using this battery of techniques, the lab was able to identify another astrocyte-specific autoantibody and define a new disease of the human nervous system.

Marker of Trouble
The disease, meningoencephalomyelitis, in plain language is inflammation within the lining of the brain and spinal cord.

“This disease was described in dogs about 15 years ago,” says Dr. Lennon. “There are lots of reports in dogs, especially pug dogs.”

But, at Mayo Clinic, the human disease was first recognized by neurologist Allen Aksamit Jr., M.D. He recognized the similar radiological appearance in a group of patients with a remarkably symptoms, explains Dr. Lennon.

The abnormalities seen in MRI images of Dr. Aksamit's patients' brain and spinal cord matched the pattern of binding to mouse brain tissue using the immunohistochemistry technique. The lab discovered that the protein targeted by antibodies in autoimmune meningoencephalomyelitis is a component of the astrocyte’s skeleton, called glial fibrillary acidic protein (GFAP). Their research findings were published in JAMA Neurology in 2016.

Unlike aquaporin-4, GFAP is inside the cell.  This is a conundrum, explains Dr. Lennon, because antibodies can't meaningfully enter cells to seek out proteins.

“The only way the immune system can get at internal proteins is via killer T-cells, the white blood cells that read protein fragments displayed on the outside of a cell,” says Dr. Lennon.

Misguided Attack
Normal cells display the protein version of a name badge, letting immune killer cells know all is well. Brain cells infected with a virus, or cancer cells, display foreign or modified protein fragments from inside the cell. T-cells recognizing those proteins as foreign orchestrate the tissue attack. They also instruct B-cells to produce antibodies against components of the targeted cells.

“It appears from evidence to date that the antibody does not itself cause the brain inflammation,” says Dr. Lennon. “It is a proxy marker of killer T-cells, which target the same brain protein.”

So if killer T-cells are active and targeting GFAP, what's initiating the immune response? That's what the lab wanted to know.

In a paper published in the Annals of Neurology, the authors report that about one-third of patients have an unsuspected cancer in a remote part of the body. The research team suspects that the immune response attacking a cancer is causing damage to the nervous system in the process.

"The most common cancer we found was actually a benign tumor of the ovary called ovarian teratoma," says Dr. McKeon. "But we found a lot of other cancer types, and in a lot of patients, we didn't know why they got this. There was no evidence of infection preceding it or cancer or anything else. It just sort of occurred."

So the researchers are hoping prospective studies and collaboration will provide additional information. But, for now, the message to patients is one of hope: There is treatment for meningoencephalomyelitis.

"A positive test for GFAP autoantibody should bring the correct diagnosis earlier and hasten the most appropriate treatment,” says Dr. Lennon. And, adds Dr. McKeon, more awareness and evaluation for cancer.

Back in the lab, the researchers continue looking for other antibodies, while keeping an eye on the discovery horizon.

"At the moment, our focus is on antibodies, but it may not always be that way," says Dr. McKeon. "There may be other biomarkers within the immune system that we can detect in serum or spinal fluid. And they may be helpful in the future for predicting a particular diagnosis or predicting a treatment response."