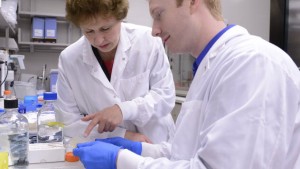 First, we’re not talking about the bird flu that decimated so many turkey and chicken farms this year. No, this is the H5N1 strain that has been infecting and killing humans around the world. So far 650 people have died, according to the World Health Organization. And that’s why Mayo Clinic and Karolinska Institutet in Sweden are joining forces to find a vaccine.

Mayo’s Vaccine Research Group has teamed up with biochemists at the Karolinska to design a next generation of peptide-based vaccines that could help immunize around the world to bird flu and to many other highly pathogenic viruses.

Bird flu has been of particular interest to the Vaccine Research Group because there are no effective vaccines—the only reliable control measures are avoidance and safe handling of infected birds—and seasonal flu shots can’t protect against it.

“We are very excited about this partnership because it’s taking our work to a new level and now we will have a vaccine product we can test,” says Inna Ovsyannikova, Ph.D., senior scientist in Laboratory Studies of Mayo’s Vaccine Research Group.

The Vaccine Research Group, under the leadership of Gregory Poland, M.D., has spent the past decade refining techniques to isolate and identify naturally processed viral peptides thought to trigger protective immune responses. In other words, the Vaccine Research Group has perfected the art of designing and assembling chemical compounds (peptides) that elicit an immune response that is identical to the response seen in humans after the receipt of a weakened virus vaccine.

Benefits to this approach include safer vaccines with fewer side effects. They can be effective in more people than traditional vaccines. The immune response tends to last longer, reducing the need for multiple vaccinations and boosters. They’re easier and cheaper to produce in large volumes and ship around the world. They don’t have to stay refrigerated. The list goes on.

Trouble with bird flu, at least, is that it has proven difficult to convert the peptide sequences into a peptide-based vaccine. A single test tube full of the synthesized peptides could produce thousands of doses of a vaccine, but the active chemical compounds break down in water and blood quickly—too quickly for them to trigger an immune response from the organism. This is where the Karolinska collaboration comes in.

“We had been looking for a collaborator for a long time to help us develop a mechanism to deliver these peptides in the form of a stable, injection-ready adjuvanted vaccine,” Dr. Ovsyannikova said. “I never actually met my collaborator from Sweden during the Mayo-Karolinska conference here in 2014, but a friend introduced me to his colleague at Karolinska, who knew someone working on a nanoparticle system called Salipro.”

Salipro, a nanoparticle drug-delivery compound, was invented at Karolinska by Dr. Jens Frauenfeld’s group, which co-authored a grant application with Dr. Ovsyannikova at the Vaccine Research Group to the Mayo-KI Collaborative Awards Program. And, thanks to this award, both institutions will have the opportunity to evaluate the effectiveness of their inventions in helping people live longer, healthier lives.

That’s often how team-based science works, and why formal collaborative partnerships and scientific meetings can prove instrumental to improving medicine and advancing medical practice. Two heads are better than one, right?

Should the Salipro-based peptide vaccine against avian influenza H5N1 virus work in mice with humanized immune systems, as Dr. Ovsyannikova expects it will, human studies will follow. The group is already discussing options for translating this same approach into development of new peptide-based vaccines for other aggressive viruses, such as H5N2 influenza, smallpox and chikungunya.