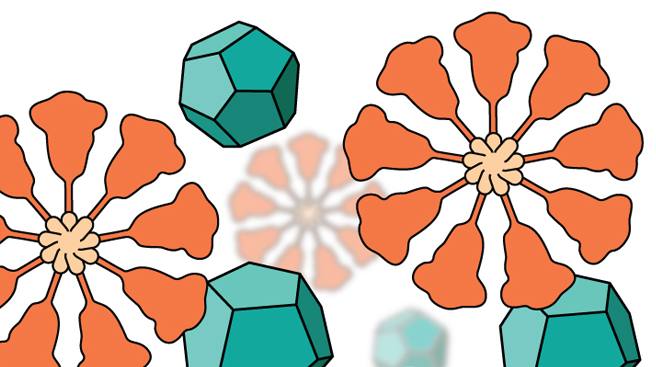 COVID-19 vaccine are bringing nanoparticle bioengineering technology into the news. But what are nanoparticles? What are nanoparticle vaccines? And how could one vaccine provide immunity to multiple viruses? Richard Kennedy, Ph.D., an immunologist and co-director of Mayo Clinic's Vaccine Research Group, explains.

Nanoparticles are a group of proteins or substances that measure between 1 and 100 nanometers. A nanometer is a billionth of a meter.

"Much like Goldilocks and the porridge that is 'just right,' nanoparticles have many characteristics that make them very good at stimulating the immune system," says Dr. Kennedy. "They are the right size for immune cells to digest, they have the right chemical and electrical charge to be taken up by the immune cells, and they are capable of carrying proteins the immune system can learn to recognize."

Coronaviruses are named for their corona, or crown, of proteins. These proteins, called spikes, are what dock on human cells ― a crucial step for infection. All of the current COVID-19 vaccines in the U.S., and the nanoparticle vaccines, use the spike gene from the original Wuhan strain of SARS-CoV-2, the virus that causes COVID-19.

The difference is in how the spike proteins show up. Think of it like this: the mRNA vaccine is like a cake recipe — the messenger RNA gives the correct amount of each ingredient to make SARS-CoV-2 spike proteins, but the body's cells actually combine the ingredients and make the proteins. The protein vaccines are like a bakery cake — the spike proteins are delivered to the body.

Creating the NVX-CoV2373 vaccine starts with identifying the genetic instructions for the spike protein. That gene is inserted into a virus capable of infecting insects but not people. Once insect cells are infected, the cells read the instructions and create large amounts of spike protein. The spike proteins self-assemble into 3D structures that look like jacks, called "trimers," which are purified from the cells. These spike trimers are mixed with a substance that stimulates the immune system ― an adjuvant ― to form nanoparticles. As they are on the virus, the spike proteins are on the outside, with the part that binds to cells facing out. The technical name for this is a recombinant protein nanoparticle.

This vaccine was tested in the United Kingdom as alpha, gamma and beta variants of COVID-19 were spreading. The results of that phase 3 clinical trial were published by The New England Journal of Medicine in September 2021. It was also was tested in Mexico and the U.S. as alpha, beta, gamma, epsilon and iota variants of COVID-19 were circulating. The results, also published by The New England Journal of Medicine in December 2021, found that two shots given to adults 21 days apart showed about 90% efficacy in preventing infection seven days after the second shot. These trials happened before the delta or omicron variants were circulating, so vaccine efficacy against the newer variants could not be tested. Later, studies on NVX-CoV2373 showed the vaccine creates an immune response that can recognize both the delta and omicron variants.

This vaccine candidate also uses the genetic information for the original Wuhan strain's spike protein, but it combines it with the genetic information for the ferritin nanoparticle. This combined gene is placed in an artificial piece of DNA called a plasmid that is inserted into cultured cells. These cells then produce large quantities of the spike-ferritin nanoparticle. The gene sequence was carefully designed to create a nanoparticle with a ferritin core that is studded with spike proteins. This protein nanoparticle is then combined with an adjuvant, similar to the one used in NVX-CoV2373, but with different oils and saponin.

The researchers tested different configurations in animal models. Because variants of SARS-CoV-2 were just beginning to circulate, they tested the vaccine against a panel of alpha, beta, gamma and delta variants, as well as the closely related SARS-CoV-1 virus. In December 2021, they reported in Science Translational Medicine that the immune response was robust, suggesting the vaccine may work for more than just SARS-CoV-2.

The researchers are now testing the vaccine in healthy adults ages 18–55.

Nanoparticle Vaccines: What Do They Mean for You?

Since the SpFN vaccine is just starting human trials, Dr. Kennedy limited his comments to NVX-CoV2373. He says the SpFN vaccine adds to the arsenal of vaccines by providing another vaccine type with its own advantages and disadvantages ― much like the existing options.

"You have to deliver a lot more protein than with an mRNA vaccine because the mRNA makes your cells produce protein," says Dr. Kennedy. "However, the lack of mRNA in the vaccine may appeal to some. The adjuvant enhances the immune response, and early studies showed very high levels of antibody. The lack of mRNA may also make the vaccine easier to store and ship."

And another point in its favor is that this vaccine, like the messenger RNA vaccines, could be taken by anyone. It doesn't contain a live virus, so people with a weakened immune system can receive it. But, he says, it takes longer to reformulate, so it won't be as easy to shift gears to accommodate a new variant as it is with a messenger RNA vaccine.

"In general, it is a spike vaccine and likely has the same limitations as the mRNA vaccines and the adenovirus vector vaccine with regards to variants," he says. "While the initial data looks promising, we won't know anything about real-world effectiveness until the vaccine gets authorized for emergency use or approved and people start taking it. My guess is that it works at least as well as the current mRNA vaccines. It also provides another option, and if people refusing to get existing vaccines feel more comfortable with this vaccine, it is a step in the right direction."