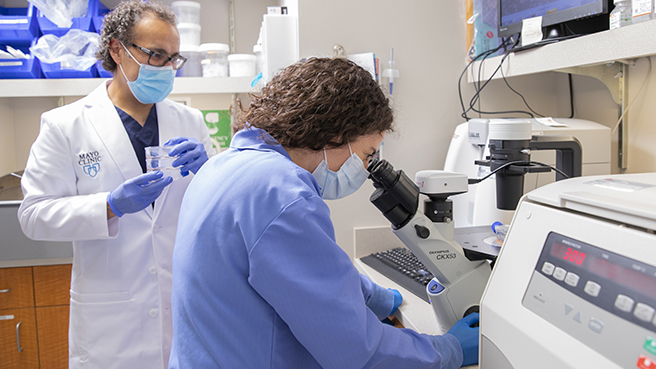 Glioblastoma is an aggressive brain tumor that is difficult to treat.  Its cells are skilled migrators. Their knack for infiltration makes it nearly impossible for any treatment ― surgery, radiation, chemotherapy or all three ― to target the entire malignancy. But Mayo researchers haven’t given up hope. They are investigating new ways to tackle these tumors and provide longer, better quality time for patients and families.

"Providers haven't been able to offer patients a significant new treatment option for glioblastoma in decades, but there's a lot of energy behind this issue," says Paula Schiapparelli, Ph.D., researcher in Mayo's Department of Neurologic Surgery.

Learning from cancer's most aggressive cells

Glioblastoma tumors are a mix of aggressive cells that migrate readily and lazier cells that tend to stay put. A team of scientists led by Alfredo Quinones-Hinojosa, M.D., a Mayo Clinic neurosurgeon, believes there's a lot to be learned from studying glioblastoma's most aggressive components. In a new paper published in Nature Biomedical Engineering, the scientists describe for the first time a tool that appears capable of measuring the aggressiveness of a glioblastoma tumor. The new device, which adapts a tool in use for breast cancer, can measure the percentage of glioblastoma tumor cells that can squeeze into an array of tiny tubes in the device. The tubes mimic brain tissue topography. The greater the percentage of cells that can migrate, the more aggressive the tumor — and the worse the patient's outcome is likely to be.

The researchers found that the investigative tool and interpretation could be used to forecast whether glioblastoma patients in the study were likely to have short- or long-term survival.

"If you can't predict a patient's prognosis, it makes treatment decisions difficult," says Dr. Schiapparelli, one of the study's authors.

As a next step, the researchers plan to test the device in a larger, prospective study. In the future, they say the tool may help experts understand the biology of these aggressive cells, which could help identify therapeutic targets.

Tumor treatments that get there ― and stay there

"When conducting surgery to remove a cancerous brain tumor, we have a tremendous opportunity to directly apply anti-cancer treatment to the part of the brain where malignant cells are most likely to return: the tumor site," says Dr. Quinones-Hinojosa. But currently, the only drug that stays locally within the brain approved by the Food and Drug Administration dissipates in the brain soon after its application and has poor brain penetration.

Partnering with engineers at Johns Hopkins University, the Mayo research team began to develop the next generation of more precise, self-assembling drugs. This is a medical approach where the chemotherapy drug is linked to a peptide and spontaneously assembles into a filament, or strand, and gel structure in the presence of a watery solution. This gel/filament mixture is slowly broken down, releasing the drug over a period of time in a localized way.

These therapies would be designed to have better brain penetration and more efficient ability to release medicine, allowing surgeons to treat brain cancer before leaving the operating room. Together, the teams created a biodegradable gel that releases anti-cancer drugs. As envisioned, the gel could be spread into the site of a removed tumor during surgery and unleash its treatment over an extended time period.

In a mouse study published in the Journal of Controlled Release, the team found that the gel could diffuse in the brain, kill glioblastoma cells, suppress tumor recurrence, and prolong survival.

"The new product isn't a burst of medicine. It's steady and controlled," says Dr. Schiapparelli, the paper's lead author. Before the gel can be studied in humans, the scientists will work to improve its formulation and design, and ensure it won't be toxic to patients.

In another example of innovative drug delivery, the investigators are learning how to use nanoparticles to better target brain cancer.

"We're working with a drug that's known to be effective, but it's had difficulty reaching glioblastoma tumors once inside the body," says Dr. Schiapparelli. "The new nanoparticle encapsulation is like putting the drug in a car that we can drive straight to the cancer."

In a study led by The Johns Hopkins University School of Medicine published in 2019 in the International Journal of Nanomedicine, the investigators successfully used the nanoparticle to deliver the drug to patient-derived glioblastoma cells in mice. This work complements a previous discovery from their laboratory: Encapsulating the same drug in a slowly degrading microparticle could reduce the growth of glioblastoma cells in animal and cell models.

"At Mayo, finding cures and providing hope is important to us, as research drives many of the things we do to advance patient care," says Dr. Quinones-Hinojosa. "We're continuously working on breaking new ground to provide patients with answers and treatment options."

"Glioblastoma research is lively and expanding at Mayo," adds Dr. Schiapparelli. "I'm optimistic for better treatment options in the future."

Shining a light on future diagnosis and treatment

Researchers shed light on one of those options in a paper in Science Advances. Building on earlier studies, a Mayo Clinic team is evaluating technology — a device the size of one's little finger — that they hope can one day serve as both a diagnostic and therapeutic tool during complicated brain surgeries involving glioblastoma patients.

"The idea is to penetrate the brain deep into areas that cannot be done with surgery," says Dr. Quinones-Hinojosa.

His team is studying a minimally invasive microneedle equipped with a laser that uses light to "paint" a targeted area of the brain during surgery. Simultaneously, specialized imaging could allow surgeons to determine whether the area contains normal or tumorous tissue. Using the new technology, tumorous tissue could be killed with heat, known as laser thermal therapy, instead of removed through surgical resection. Currently, pathologists team up with surgeons during a procedure to collect biopsied tissue and then take it back to a lab for analysis.

"We hope this new approach will prove to be less invasive, save time and prevent additional surgeries," says Dr. Quinones-Hinojosa. "More study is needed, but we hope this is something we could be using in the OR within the next five to 10 years."

Researchers say the technology could have future implications for other conditions, including renal cell, breast and lung cancers, and even epilepsy.

These projects were conducted with collaborators at The Johns Hopkins University School of Medicine. The research published in Science Advances was supported, in part, by grants from the National Institutes of Health and the Wallace H. Coulter Foundation.