Home More Stories Seeing Cancer, But Not Through a Microscope 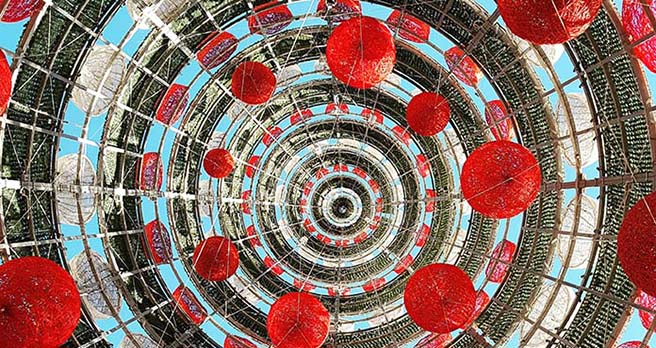 Toward the end of the 19th century, a French doctor named Ernest Besnier coined the term “biopsy,” combining the Greek bios (life) and opsis (a sight). In the decades since, clinicians have performed countless biopsies on suspected cancer patients, all to catch a glimpse of cells on the brink of growing out of control. This year alone, more than a million breast biopsies will be performed in the U.S.

These potentially life-saving procedures come at a price, both in finances and flesh, as they require clinicians to carve out pieces of tissue or suck up cells with a large needle. But what if cancer could be caught, not with these costly methods, but through a less invasive blood draw? Mayo Clinic researchers believe that may be possible in the not-too-distant future.

“That’s the Holy Grail. It’s what everybody is hoping for,” said Fergus Couch, Ph.D., a cancer geneticist. Dr. Couch and dozens of researchers at Mayo Clinic, along with partners in industry, are part of a national push to develop such a test.

In redefining a 19th century technique, “liquid biopsies” can do much more than detect cancer early. They also could be used to determine the best course of treatment or to track the response to therapy, predicting the likelihood of a recurrence long before new tumors could be detected otherwise.

The Etymology of Cancer

Oncologist Minetta Liu, M.D., believes the power of liquid biopsies lies in their ability to impact all aspects of cancer care. A leader in the development of liquid biopsies at Mayo Clinic, Dr. Liu is known for being eternally dissatisfied with the status quo.

When normal cells turn cancerous, they stop behaving the way normal cells do. They grow out of control, becoming misshapen or the wrong size, with enlarged nuclei stuffed with more DNA. These are the features that scientists look for in cells or tissues extracted during a traditional biopsy. But there are other telltale characteristics of cancer cells that cannot be viewed under a microscope. A dying cancer cell can shed tiny bits of genetic material into the bloodstream, much like a dying star emits intense flashes of light into the universe.

Until about 25 years ago, these traces of cancer were too hard to find, and too miniscule to be of much use to clinicians. But advances in technology have enabled researchers to capture what they call circulating cell-free (cf) DNA, as well as other debris shed from tumors. Now they are working to see if this genetic flotsam and jetsam can be used to diagnose the earliest stages of cancer, on its own or in concert with more traditional methods.

One of the most ambitious efforts in this area comes from a collaboration between Mayo Clinic, a handful of other medical centers, and the biotechnology company GRAIL. Through the STRIVE study, researchers are exploring whether genetic material circulating in the blood can be used to screen for cancer. They completed recruitment for the study in less than two years, gathering blood samples from more than 90,000 women at the time of their screening mammogram, including 35,000 participants from all three Mayo campuses and the Mayo Clinic Health System. “It was a tour de force,” said Dr. Liu. The researchers are now waiting to see which patients develop cancer, and whether those outcomes are in line with the findings of the liquid biopsy and standard clinical care.

Development of the STRIVE study was originally focused on breast cancer but quickly evolved into evaluating cfDNA for multiple malignancies. Celine Vachon, Ph.D., a cancer and genetic epidemiologist who co-leads the Mayo Clinic study alongside Drs. Liu and Couch, said the expansion has increased her enthusiasm for the project. “It means we may have the ability to detect multiple and importantly, rare cancers, when they are early and most able to be treated with the most successful outcomes,” she said.

The aim now is to create a multi-cancer screening test to detect signals in the blood indicating the presence of cancer cells in the body. Importantly, the same test will provide information on the tissue of origin, enabling clinicians to tailor further evaluation and confirm the suspected diagnosis of malignancy. “The goal is not to replace existing screening tools. Mammography, colonoscopy, PAP smears and the like are still needed,” said Dr. Liu. “The issue is that available screening approaches are limited to a handful of cancer types and are not 100% accurate. There is clearly room for improvement.”

At the 2019 American Society of Clinical Oncology Meeting, Dr. Liu presented data showing that the current version of the test was able to detect 12 of the deadliest cancers at all stages of the disease, with a false positive rate of less than 1%. The test could pinpoint the tissue of origin with an accuracy of 93%. The findings were generated from the Circulating Cell-Free Genome Atlas Study, another collaboration with GRAIL that developed the blood test that will then be validated in STRIVE and other studies.

Despite the promising results, a universal cancer test will require more validation before it can become standard clinical practice. However, other work from Mayo, both in-house and in partnership with external collaborators, has spurred other kinds of liquid biopsies that are in clinical use. One of the most notable examples comes from the lab of Mayo Clinic gastroenterologist David Ahlquist, M.D., who worked with Mayo physician-scientists John Kisiel, M.D., and Paul Limburg, M.D., to develop the research used by a company,Exact Sciences, to create the colorectal screening test known as Cologuard. The collaboration with Exact Sciences continues as the company also explores developing a blood-based test for various cancers.

For some of the deadliest malignancies, like pancreatic cancer and liver cancer, the tissue biopsies used to typically diagnose disease often do not leave enough material to extract information to guide treatment. So, when a new test emerged about five years ago that promised to identify genetic mutations – not in tissues but in blood – oncologist Kabir Mody, M.D., was eager to offer it to his patients. It analyzes more than 70 genes in the circulating DNA shed from tumors. Dr. Mody has found that the test identifies many mutations that either cause cancer or fuel its progression, making them attractive targets for chemotherapy.

In the last year, Dr. Mody has published a handful of papers exploring the use of liquid biopsy for different kinds of cancers, including hepatocellular carcinoma, gastric adenocarcinomas, and biliary tract cancers. Because different cancers have different origin stories and different trajectories, Dr. Mody has found that the number of therapeutically relevant mutations can vary from cancer to cancer.

Still, he and others have found that liquid biopsies carry information that can be meaningful to patients. For example, in a study published in 2019 in JCO Precision Oncology, Dr. Mody found therapeutically relevant alterations in 55% of patients with locally advanced or metastatic biliary tract cancer.

“There are patients in whom we’ve seen alterations in genes that we can do something about right now, like the oncogenes BRAF or HER2,” said Dr. Mody, who treats patients with gastrointestinal cancer at Mayo Clinic. “Those patients have gotten significant benefit in terms of treatment and have been so grateful for the hope that they’ve been given.”

Dr. Mody is particularly interested in mapping the landscape of genetic alterations that can be measured in blood and then looking to see how similar they are to what can be found in tissue. Most recently, he has compared the findings from liquid biopsy and tissue biopsy from patients with pancreatic cancer and have found that they shared considerable overlap.

“I think it's important we do our due diligence,” said Dr. Mody. “While we believe what we see on liquid biopsy, and we have patient stories to show that it has benefits, we still need to prove the outcomes of treating based on liquid biopsy are real and reliable.”

Determining whether the chosen cancer treatment works – and in turn whether the cancer is likely to recur – is a major focus of cancer care, and it is where physician-researchers like Barbara Pockaj, M.D., think liquid biopsies should go next. A Mayo Clinic surgical oncologist, Dr. Pockaj said clinicians often give their patients a litany of treatments that include a combination of chemotherapy, surgery, and radiation to maximize the chances for a cure. “But we know that in all cancers, including breast cancer, there’s overtreatment and there’s undertreatment,” said Dr. Pockaj.

Dr. Pockaj is one of several Mayo researchers working to develop a blood test that can predict which patients will respond and how, so they can avoid unnecessary treatments and the associated side effects. “I think what we need is an end-of-treatment marker,” she said. “This will tell us, OK, who needs more therapy? Who needs less? Can we figure that out?”

To answer those questions, Dr. Pockaj and Muhammed Murtaza, Ph.D., a cancer genomics expert with the company TGen, developed a sophisticated liquid biopsy technique that can detect circulating tumor DNA at levels a hundred times lower than current methods. They used this technique, called targeted digital sequencing (TARDIS), to pick up the tiniest traces of cancer in samples taken from breast cancer patients at various points during their treatment. The researchers then correlated the amount of tumor DNA as well as the types of cancer-causing mutations they carried with patient outcomes.

The study, published in 2019 in Science Translational Medicine, successfully identified patients who harbored residual disease as well as those who did not, suggesting that the technique could be used to personalize treatment. “Nobody else has been able to do that,” said Dr. Pockaj. She said the team now plans to validate its findings and will explore combining the liquid biopsy test with other monitoring methods like mammograms and MRIs.

With each new experiment, technique and clinical trial, Mayo Clinic is expanding the definition of what a biopsy can do for cancer patients. Mayo’s laboratory medicine and pathology department has brought up several internal tests for liquid biopsy that clinicians are using to guide treatment. The Center for Individualized Medicine is working to develop a new personalized, blood-based tool for monitoring cancer progression. Ultimately, the researchers working in this space say they think liquid biopsies could transform the way cancer is detected, the way treatment regimens are selected, and the way response is tracked. But Dr. Couch says there is still much more work to be done before the technique will reach its full potential.

“It is a very active area of research, and people are very excited that it is going to make a difference,” he said. “We would hope that in a few years’ time you could go for your annual checkup and get a blood test that would check you for a constellation of fairly common cancers. That would be big.”