The Tale of the Captivating Researcher and the Spider Goat

Graduate students learn how to explain their research, so projects and careers aren’t lost in translation.

Given 180 seconds to explain his research in a live competition, Gabriel Martínez-Gálvez confessed to a boyhood obsession with superpowers and a grad-school obsession with the potential for enhanced abilities through genome engineering. Then, he told the audience, the future has already arrived in … the amazing spider goat. 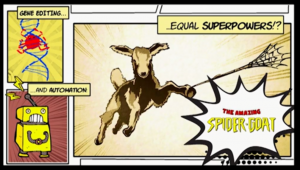 Genetically modified by the addition of a spider’s web-spinning gene, the spider goat actually produces milk containing an extra protein that can be extracted and spun into heavy-duty silk thread.

Similar gene editing could be used to achieve countless benefits, such as accelerated healing, HIV resistance and cancer therapy, says Martínez-Gálvez, a mild-mannered, fourth-year Ph.D. candidate in biomedical engineering and physiology at Mayo Clinic Graduate School of Biomedical Sciences. His research on developing more accurate and dependable gene editing “will make this more science than fiction.”

With a combination of humor, storytelling and simple explanations, Martínez-Gálvez won the school’s Three-Minute Thesis competition, which challenges grad students to provide a compelling description of their research in lay terms. But Martínez-Gálvez, who earned a trip to Grand Rapids, Michigan, for the regional competition, believed in the value of communication skills long before his victory.

“It’s important to get your message across,” he says. “Communication, using the right language for the right people, can move your ideas forward. Science is cool, and we have to able to talk about how things work.”

The Pursuit of Understanding
The stereotypical scientist on TV and in blockbuster films can spew mumbo jumbo on a planet-threatening topic, causing other earthlings to stare blankly, then shift their attention to a mundane subject.

In the real world, biomedical scientists can’t afford to be complex, unclear or boring.

“It doesn’t matter how brilliant you are. If you can’t communicate well, your research results won’t reach physicians or society,” says Karen Hedin, Ph.D., director of both the immunology track and Regenerative Sciences Training Program in the Ph.D. program at Mayo Clinic Graduate School of Biomedical Sciences. “All scientists have to share their results, which requires communication -- oral, written, formal, informal. It’s impossible to be an effective scientist if you can’t do that.”

The stakes run high. Scientists who are able to make others understand and care about their research receive grants, form collaborations, publish articles, speak at conferences, provide expert opinions on regulatory issues, and repeat the cycle. The rest face a stunted career.

Times Change
As a Ph.D. candidate in biochemistry, Hedin wrote no research articles and gave just one oral presentation: Defending her thesis on her last day of grad school.

“I didn’t even see a grant application until I was applying for a faculty position, and that was eight years after getting my Ph.D.,” says Dr. Hedin. “In the past, it was assumed the student would pick up these skills over time. We can’t just leave that to chance.”

“Developing excellent written and oral communication skills is among the most important parts of Ph.D. training and is emphasized constantly throughout our program,” says Louis “Jim” Maher III, Ph.D., the school’s dean. “Every mentor and every Ph.D. track builds communication skills training into daily and weekly activities.”

To graduate, all Ph.D. students must publish at least one research paper in a mainstream scientific journal, which ensures that their research is “both novel and important enough to be published,” Dr. Hedin says. Many Mayo Ph.D. students graduate as an author of multiple scientific papers, she says.

Intro to Grant Writing
While all top graduate schools provide communication training through a variety of activities, Dr. Hedin says Mayo’s hands-on writing course for first-year students is unique. Since 2010, students in Critical Thinking & Writing have been learning how to write a grant proposal for a research project worthy of funding by the National Institutes of Health (NIH).

“Students don’t just sit and listen,” says Dr. Hedin, one of the instructors. “They actually write a grant proposal.”

As part of the course, students develop a six- to 12-page mock proposal for an NIH research grant, based on their own work in the lab. In small groups, faculty and students ask questions and critique each proposal at various stages. Dr. Hedin says it’s an eye-opening experience for most students. It exposes them to research in other Ph.D. tracks, emphasizes the need to write clearly so students in other disciplines can understand, and introduces rigorous scientific process with experiments designed to fill gaps in existing knowledge and prove or disprove a hypothesis.

“Grant writing is so important for career success,” Dr. Hedin says. “We hope they apply this knowledge and get funding at the post-doctoral stage. If you do get a grant, it’s a sure sign that you’re going to be successful.”

The school’s Initiative for Maximizing Student Development (IMSD), an NIH-funded program, provides additional writing and presentation training. Although designed as enrichment curriculum for students from groups underrepresented in biomedical research, the weekly workshops are open to all students in their first two years of graduate school.

Three of the five finalists in the school’s Three-Minute Thesis competition, including Martínez-Gálvez, who is from Colombia, were bilingual Latinos.

Clarity Comes First
Communication training emphasizes several lessons. “We stress clarity,” says Dr. Hedin, an instructor for both IMSD and the grant-writing course. “The first thing to remember is that, if people don’t understand, you’ve failed.”

And more communication training appears to make a difference.

“Our Ph.D. graduates graduate sooner, publish more papers, and are much better at oral communication,” says Dr. Hedin. “People who hire say that, in presentations, our graduates just blew everybody else out of the water.”

At the 14-state Midwestern Association of Graduate Schools regional Three-Minute Thesis that claim was put to the test. Students from 36 graduate schools competed in April 2018, Martínez-Gálvez among them.

Comparing genetic information to a Microsoft Word document, Martínez-Gálvez explained that he wants to prevent genetic typos that increase the chance of disease when modifying organisms. To develop a more accurate and dependable “keyboard” for gene editing, he programmed a computer to read gene editing data, learn from it, and identify the underlying reasons behind genetic typos. By automating the processing of massive amounts of data, he hopes to speed engineering of a keyboard that can predict and auto-correct genetic typos.

After two rounds of presentations, the judges named the winner: Martínez-Gálvez, who says the victory inspired him to complete his research more quickly and pursue a career that takes advantage of his ability to captivate an audience.

“I’ve always thought of myself as more of a communicator or teacher than a scientist,” he says. “I’m more motivated when I have to deliver information, especially for the lay person or a student.” 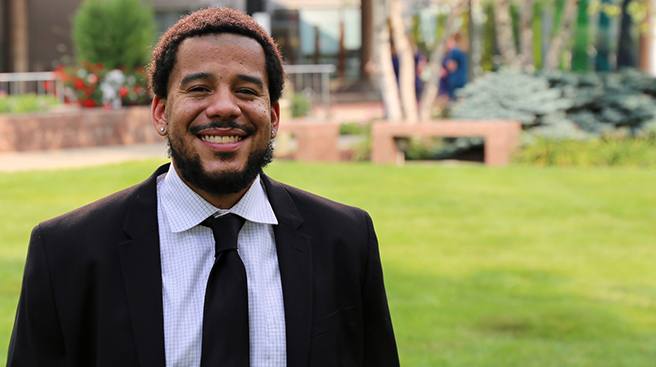