Mayo Clinic researcher and ophthalmologist Raymond Iezzi, M.D., rescues sight. He combines precise surgical techniques with technology like bionics, biosensors and femtosecond lasers to help patients. Most of the diseases he sees are related to the retina — the active system of light sensitive tissues within the eye.

Working with a team of Mayo colleagues, Dr. Iezzi is advancing multiple ideas to address unmet patient needs and restore hope to those who manage eye conditions, both rare and common.

Eye-natomy
The retina is an extension of the brain. It contains millions of nerve endings (including photoreceptor rods and cones) that perceive light and respond by transmitting impulses through the optic nerve to the brain, where they are transfigured into imagery and imbued with meaning. 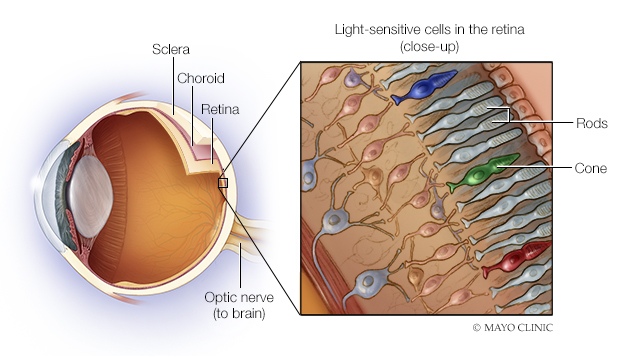 As the eye takes in light, images are cast on the retina, almost like projections on a movie screen. But for millions of Americans every year, the theater goes dark. Accidents, conditions and diseases, many of which involve the breakdown of photoreceptor function, cause patients to seek out Dr. Iezzi. Typically, his younger patients have retinitis pigmentosa, while most of his older patients have age-related macular degeneration.

Narrowing Vision
Rod cells help us see in dim light, while cones give us color vision in bright light. Rods are concentrated mostly at the retina’s periphery, while cones occur at its center. At first, retinitis pigmentosa affects only rods, making it difficult for patients to see objects that aren’t directly in front of them—like trying to watch a movie through a paper towel roll. If retinitis pigmentosa reaches the cones, patients can be rendered blind. It is a rare disease caused by genetic mutations in a host of genes that code for proteins needed by photoreceptors in the retina.

While retinitis pigmentosa starts at the outer edge of the retina and moves inward, age-related macular degeneration starts in the center (the macula) and moves outward—like watching a movie on a screen with a ragged hole in the middle.

Bionic Eye
Even though retinitis pigmentosa kills off photoreceptors, it leaves the optic nerve relatively intact. In the past that was small consolation, but now some of Dr. Iezzi’s patients — those who are blind but have healthy optic nerves — are among the first in the world to receive an implant that is helping them to see. This implant, or bionic eye, sends light wave signals to the optic nerve, bypassing the damaged retina.

Called the Argus II after the Greek god with 100 eyeballs, the implant uploads images taken by a miniature video camera worn on a pair of glasses. Patients carry a little computer pack that receives video signal feed from their camera, processes it, and beams images directly to their bionic eye. It doesn't replace the sight these patients lost, but it does help.

“Patients feel that their quality of life has improved,” Dr. Iezzi says. “They can see obstacles in front of them, find the light switch, play hide-and-seek with their grandkids, see waves going by at the seashore. They find their confidence again.”

For patients who have lost vision because of retinal detachment, typically from trauma, or optic nerve degeneration from glaucoma, Dr. Iezzi is working with a team of neurosurgeons, neurologists, low-vision specialists and ophthalmologists on modifying the implant to go directly into the brain.

Neuroprotection
Bionic eyes are nifty, but even better, as far as patients with retinitis pigmentosa are concerned, would be to slow down or stop photoreceptor degeneration before they need an implant. With that goal in mind, researchers began looking closely at using a hormone called ciliary neurotrophic factor, and Dr. Iezzi’s team was among them. But they quickly went off the beaten track, in a good way.

“It was quite an accident,” reflects Iezzi. “We were just seeking a method for chronic drug delivery.”

As he set up equipment to test the hormone, Dr. Iezzi was sent a test substance just to check the delivery system. It was a sustained release, anti-inflammatory steroid. Dr. Iezzi’s lab technician ran the test, and, confused, asked him if the rats they were using had gotten mixed up, because they seemed to have normal retinas.

There had been no error. The drug had significantly slowed retinitis pigmentosa progression in the rats.

“This is a disease that we didn’t think had anything to do with inflammation,” Dr. Iezzi explains. “Why would a steroid stop degeneration?” This important clue helped the team understand the way this inborn error of metabolism induces inflammation, and “a wildfire of destruction,” as he puts it. Dr. Iezzi is now pursuing research on the safety and efficacy of the steroid but to date, there are still no drugs on the market for treating retinitis pigmentosa.

Biosensor: Limiting the need for Injections
Age-related macular degeneration is common condition that results in serious visual impairment, usually in people age 50 and older. It’s caused by a combination of genetic and environmental factors that disable the layer of cells underlying the retina. While there's no cure for age-related macular degeneration, Dr. Iezzi says the good news is that there is a treatment he has found to be helpful. The bad news is the drug must be injected directly into the jelly-like substance that fills the back of the eye.

“The needle is placed right through the white part of the eye,” explains Dr. Iezzi. “It’s uncomfortable, it’s expensive and there’s a small risk of infection.”

The therapy is based on the discovery that a group of proteins, called vascular endothelial growth factors (VEGFs), play a role in the formation of the abnormal blood vessels that damage retina in advanced age-related macular degeneration. The drug binds to the growth factors and inhibits their activities. But while some people can go several months between treatments, others need injections every four weeks. Figuring out how often someone needs the injections has been a matter of trial and error so Dr. Iezzi is working on a way to tell how much VEGF is present, called a biosensor.

“It’s something like a glucose test strip,” explains Dr. Iezzi.

The biosensor is made up of a transducer and a biological element. When VEGF interacts with a biological element, the resulting biochemical response is converted by the transducer into an electrical signal that can be measured. The idea is to make on-the-spot VEGF measurements during a patient’s first couple of drug injections. The electrical readout is analyzed then and there by a computer algorithm and the correct dose and frequency determined.

To build the VEGF biosensor, Dr. Iezzi is working closely with Mayo Clinic bioengineer Kevin Bennet, Ph.D., and his team. “Engineering’s been around for 65 years to provide system solutions for patients,” explains Dr. Bennet, and he says they routinely develops unique medical devices. The sensor is basically 3D-printed in multiple passes. The first pass lays down graphene, a single-atomic layer of carbon atoms arranged in a hexagonal lattice that has high conductivity, flexibility and transparency. Later passes lay down an electrical conductor, and an antibody that binds to VEGF. When the finished sensor comes into contact with VEGF molecules, it’s electrical resistance changes. “You’ve got these multiple layers,” Bennet explains, “and as the aqueous humor diffuses through them, (it reaches the antibody), creating a signal that can be read.”

They are now working to miniaturize their sensor, to make it so tiny that it fits inside the needle needed to inject the anti-VEGF drugs.

Femtosecond laser
As you read this text, you are using the part of your retina most affected by age-related macular degeneration. A smooth, slightly concave area at the center of the retina, the macula is only about as big as a chia seed, yet it’s responsible for your ability to distinguish among faces, to drive, and to enjoy a good movie.

Age-related macular degeneration begins in the layer of cells underlying the retina (retinal pigment epithelial cells) that are responsible for passing oxygen, sugar and other essential molecules up to the macula, and for moving waste products down to the blood vessels underneath. Degeneration occurs when the retina can no longer throw out the trash. Waste products, called “drusen” build up, killing cells off. Only the photoreceptors in the center of the retina are lost, leaving patients with millions of healthy photoreceptors at its periphery.

Ultra-fast lasers are used routinely to correct eyesight and to accomplish procedures like corneal transplants and noninvasive glaucoma surgeries. So Dr. Iezzi wondered if lasers might also help age-related macular degeneration. Lasers concentrate light over and over again until it can be shot out as a powerful beam. In femtosecond lasers, the pulses emitted are extremely short — so short that they only last for one millionth of a billionth of a second known as a femtosecond. Because they’re so brief, no heat is transferred to the cells and tissues surrounding the incision.

Dr. Iezzi is pioneering the use of a femtosecond lasers to excise sheets of healthy tissue from the retinal periphery, transplanting them to the macula.

"These sheets are very thin and delicate, like wet tissue paper," he says. "Until now, there has been literally no surgical method capable of creating them.”

For patients with advanced age-related macular degeneration, Dr. Iezzi believes that relocating some of their remaining photoreceptors to the center of the retina may go a long way toward restoring vision to a functional degree.

Mayo Clinic originally recruited Dr. Iezzi because he had experience both performing complex surgical procedures and applying for research funding; he chose Mayo to enhance his ability to help patients.