Christina von Roemeling is a graduate student. What she's learning is research, and why she's learning it is personal. Having lost one relative to a brain tumor and watched several others battle breast cancer, von Roemeling says she was eager to join the cancer research effort. Which she has, with gusto.

Von Roemeling is participating in biomedical research on brain cancer and stroke as part of Mayo Clinic’s Cancer Nanotechnology and Tumor Immunology Laboratory.

Nano refers to the size of the materials used, while technology speaks to the manipulation of those objects. Nanotechnology works with ─ surprise ─ nanoparticles which measure between 1 and 100 nanometers (billionths of a meter) in at least two dimensions. For comparison, a human hair is about 100,000 nanometers in diameter. These tiny objects are tasked with a big job: Usually, they carry treatment into hard-to-reach places, such as the brain.

But the Nanotechnology Lab, including von Roemeling, used nanoparticles in a new way. Their particles activated the immune system against breast cancer tumors in mice. This nanoparticle-as-medicine strategy caused most tumors to shrink, and, when re-exposed to tumor cells a month later, the treated mice seemed resistant to developing cancer.

“It’s an approach that had never been used before,” von Roemeling says. “If this truly works in humans, it could change the way we treat patients. It’s very exciting.”

Opportunity
With a bachelor’s degree in biobehavioral health, von Roemeling began working in 2008 with Mayo’s Cancer Biology and Translational Oncogenomics Laboratory in 2008. There, the research focuses on understanding molecular mechanisms that fuel cancer and developing molecular targeted therapies.

“I absolutely fell in love with the work,” she says.

Clarity
Soon after joining the lab, von Roemeling started taking classes through Mayo Clinic Graduate School of Biomedical Sciences to better understand the biology behind disease and how to use that knowledge in the lab.

“It was really fascinating,” she says. “What I was learning in the classroom was directly applicable to the work I was doing in the lab.”

Eventually, she realized that a master’s degree wouldn’t do. In summer 2014, at age 29, von Roemeling enrolled in Mayo Clinic Graduate School of Biomedical Sciences for doctoral training in biochemistry and molecular biology.

“I really wanted to become an independent investigator,” she says. “If I hadn’t taken graduate-level classes, I wouldn’t have found the motivation to pursue this path.”

Igniting and nurturing excitement within an apprentice investigator such as von Roemeling helps biomedical research thrive, and sets up new investigators to transition seamlessly to independence. It is a central pillar of the graduate school.

“Betty is so optimistic and forward-thinking, and geared toward clinical breakthroughs. It’s hard not to gravitate to that,” von Roemeling says. “Her research in nanomedicine is really cutting-edge.” 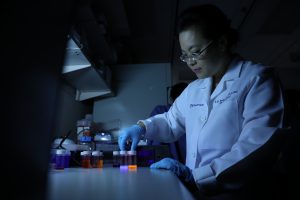 In nanomedicine, research has focused on delivering drugs to tumors. But the body tends to purge nanoparticles before they reach their target. To capitalize on that natural tendency, Dr. Kim’s team developed a new type of nanoparticle that actively engages the immune system to kill cancer cells. The nanoparticle is coated with antibodies that target a molecule found on 40 percent of breast cancers and molecules that alert the immune system’s cleanup cells to engulf and destroy foreign material. These cells also relay information to specialized T-cells that help eradicate remaining cancer cells, and learn to recognize and destroy recurrent tumors.

In their study, published in Nature Nanotechnology, mice injected with the nanoparticle showed a 70 to 80 percent reduction in tumor size and resistance to future tumor recurrence.

“Our study represents a novel concept of designing nanomedicine that can actively interact with the immune cells in our body and modulate their functions to treat human diseases,” says Dr. Kim. “This approach hopefully will open new doors in the design of new nanomedicine-based immunotherapies to target different types of cancer and other diseases.”

Research Education
Currently, the team is designing nanoparticles to conquer two challenges in brain diseases. First, the blood-brain barrier ─ a membrane separating circulating blood from the brain ─ allows nutrients to enter but blocks other substances, including traditional medications. Second, glioblastoma, the most common and most aggressive primary brain tumor, can turn off the immune system.

“That allows the brain tumor to grow very fast and become so invasive,” von Roemeling says.

Nanoparticles are small enough to slip through the blood-brain barrier, and Dr. Kim’s team is designing nanoparticles to carry immunotherapy to combat brain tumors and neurodegeneration.

“All of our treatment strategies for brain cancer have the goal to reactivate the immune system,” says von Roemeling.

From Apprentice to Independent Researcher
Versatility and the ability to combine those talents into new discoveries have made von Roemeling stand out as a promising biomedical researcher, according to Dr. Kim.

“She’s exploring multiple disciplines and technologies,” says Dr. Kim. “And she’s studying questions that wouldn’t have been asked if she had focused in one area of research.”

“What’s unique about stroke is the prolonged inflammatory response,” von Roemeling says. “After the blockage is resolved, persistent inflammation continues to damage tissue. We can’t prevent the blockage, so how can we minimize the damage that occurs afterward?”

Hoping to improve quality of life for patients and their families, von Roemeling has designed a potential answer in nanoparticles that turn off the inflammatory response. Microglia, the primary immune cells of the brain, migrate to the site of injury, where they create inflammation and break down damaged cells. The nanoparticle developed in Dr. Kim’s laboratory targets microglia and releases an inhibitor that orders microglia to call off inflammation.

“We’re hoping for better outcomes during recovery, so the level of cognitive impairment is not so dire,” says von Roemeling, who recently received two years of funding from the American Heart Association to continue her research.

Studying the Route from Well-being to Being Well

Throughout her training to become an M.D.-Ph.D. physician-scientist, Catherine "Kit" Knier has been interested in wide-ranging approaches that improve health. But during the Ph.D. component ...

Curious about what it's like to work in a basic science lab, Yak Nak, a first-year medical student at the University of Missouri-Columbia, signed on ...