In the world of scientific research, a decade can go by without major findings on what’s known about a disease. But over the past 10 years, researchers have been charting the map regarding the condition known as frontotemporal dementia. This debilitating early-onset neuro-degenerative disorder has ties to Alzheimer’s and Lou Gehrig’s disease, also known as amyotrophic lateral sclerosis, or ALS. Many of those findings have emerged from neuroscience labs at Mayo Clinic’s Florida campus, where research is pushing toward better diagnosis and treatments. One of the top researchers is neurogeneticist Rosa Rademakers, Ph.D., who took up the reins in pursuit of frontotemporal dementia genes and quickly became a world leader in the field.

If you haven’t heard of frontotemporal dementia, it’s not surprising. The disease has long confounded researchers and physicians. Frontotemporal dementia is known to affect as many as 50,000 people in the United States, ranking as the second- leading cause of presenile neurodegeneration after Alzheimer’s disease.

But the clinical signs can be hard to pinpoint. Symptoms include strange and sudden behavioral changes, such as social inappropriateness, apathy, poor hygiene, hoarding, and sometimes, progressive loss of language.

These behavioral changes can occur in patients as young as 50 and suddenly upend their lives. “It can take over a personality and can be devastating to families,” Dr. Rademakers notes. Frontotemporal dementia also can occur with a movement disorder, such as Parkinson’s, or in conjunction with ALS. But, since no diagnostic tests exist, the disease can be mistaken as early-onset Alzheimer’s or even a psychiatric disorder. A definitive diagnosis is usually only possible during an autopsy, when it’s possible to examine the levels of specific proteins present in the brain.

It happened at Mayo Clinic

This story of discovery really began at Mayo Clinic’s Florida campus nearly 20 years ago. In 1998, the lab of Michael Hutton, Ph.D., discovered that mutations in the tau gene were associated with frontotemporal dementia. Misfolded tau proteins were known to turn up Alzheimer’s and certain parkinsonian syndromes, but, surprisingly, the mutated gene was a factor in 10 to 15 percent of frontotemporal dementia patients.

In 2005, Dr. Rademakers arrived in Dr. Hutton’s lab as a postdoctoral fellow, eager to expand her skills in neuroscience. A native of the Netherlands and the daughter of a famous TV personality, she grew up and studied in Belgium, taking an early interest in genetics. “I was really amazed by how quite simplistic code could give rise to so many complicated things,” she says. 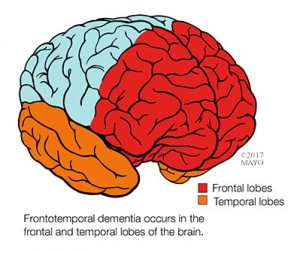 As a doctoral student, she worked in the lab of renowned geneticist Christine Van Broeckhoven, Ph.D., discoverer of the first gene for Alzheimer’s, at the University of Antwerp in Belgium. Dr. Rademakers’ project was a tough one that, for years, had also been underway at Mayo: looking for a second gene for frontotemporal dementia that was believed to reside on chromosome 17. Both the Belgian and Mayo labs shared samples of brain tissue from patients, though they were looking for the latest frontotemporal dementia gene in disparate family groups.

The gene clearly was inherited, but few clues existed about how the disease was passed along from one generation to the next. “Some family members never got the disease,” Dr. Rademakers explains. “And some who got sick showed dementia early, while others had no behavioral changes until later in life.”

Gene hunting at the time involved a painstaking process, focusing on a small region of the chromosome and scrutinizing one gene at a time. When Dr. Rademakers and the Hutton team hit the progranulin gene (known as GRN), it was the 80th one they had tested. Simultaneously, the lab in Belgium published its related finding, to which Dr. Rademakers also contributed, that a single copy of mutated GRN caused neurodegeneration by reducing granulin protein by up to 50 percent in the brain.

“Our two labs published side-by-side papers in Nature. Dr. Rademakers’ name was the only one that appeared on both,” says Dr. Van Broeckhoven.

A New window into a disease

The findings were a launching point for Dr. Rademakers, who decided to stay on at Mayo Clinic to address questions raised by the new gene. “She’s very precise and has a great eye for detail, but she’s also innovative in her approach,” Dr. Hutton says, noting that her follow-up involved developing an unusual genetic screen, looking for variants in the progranulin gene.

Her offbeat process revealed that progranulin interacts with the neural protein, sortilin, providing the first opportunity to consider developing therapies for frontotemporal dementia by targeting the interaction. “This is not even the work she’s known best for now, but it was so important for the understanding of how progranulin works,” Dr. Hutton says.

She went on to develop a highly predictive blood test to detect the progranulin mutation in patients. But what vexed her was that the progranulin gene still accounted for only 15 percent of familial frontotemporal dementia cases. There were other genes to be discovered. Then came a twist of fate. In 2007, Dr. Hutton left Mayo to work in the pharmaceutical industry. Dr. Rademakers was chosen to take on the Mayo projects underway and head up a lab of researchers. Her new position coincided with a sea change in how genetic research is conducted: the introduction of next-generation genetic sequencing that allowed the perusal of the entire genome in a matter of weeks.

Her new lab went after another frontotemporal dementia gene, on chromosome 9, that seemed to turn up in conjunction with ALS. It was no cakewalk. “With the new technology, we thought it would take about 10 minutes to find the gene, but there was

nothing. Labs around the world were pulling their hair out trying to figure out what the gene was,” she said. While the search was on, her lab continued to advance studies of progranulin, describing genetic regulators of the protein in the brain.

Then, in 2011, a technician in her group, Mariely DeJesus Hernandez, focused on an unusual repetition in the genes of frontotemporal dementia samples, a stutter of sequences — GGGGCC — that occurred three times.

She designed an assay to compare the stutter in frontotemporal dementia patients against healthy family members. “We realized all the patients had hundreds or even thousands of copies of that DNA, while our healthy people had up to 30 at the most,” Dr. Rademakers says.

The finding has been nothing short of a game-changer in frontotemporal dementia and ALS research. The Neuron paper has been cited more than 1,450 times and has spurred an international explosion of research in c9orf72. “If you can find a therapy for this mutation, it will really affect a lot of people,” Dr. Rademakers says.

The neurological community took note of the genetic advance, awarding Dr. Rademakers the 2013 Sheila Essey Award: An Award for ALS Research. In 2015, at 37, she was named the Mildred A. and Henry Uihlein II Professor of Medical Research in the Mayo Clinic College of Medicine and Science, becoming the youngest person at Mayo Clinic to hold a named professorship. Then, in 2016, a resounding nod: she received one of the highest international honors in the field: the Potamkin Prize for Research in Pick’s, Alzheimer’s and Related Diseases — the same award her mentors had won before her.

An All-star team ready for a challenge

As the discoveries unravel the steps of neurodegeneration, they also suggest ideas for therapies. “Those discoveries have enabled us to explore small molecule drug candidates to block RNA defects caused by the c9orf72 mutation and also to investigate potential biomarkers to help diagnose patients,” Dr. Petrucelli says. He and Dr. Rademakers have teamed with Kevin Boylan, M.D., a Mayo Clinic neurologist, and Dennis Dickson, M.D., a Mayo Clinic neuropathologist and another Potamkin Prize winner, to attain a program grant from the NIH to study c9orf72. They are looking at how the gene wreaks havoc in the brain and why its expression levels are an important predictor of survival. The work is aided by a unique resource in Florida: the Mayo Clinic Brain Bank, which has thousands of slides and frozen samples of brain tissue donated by patients and healthy family members to resolve questions about neurological diseases.

What the studies continue to show is that frontotemporal dementia is not a singular disease but is highly varied, down to its genetic sources. “Treating patients with each of those mutations may require different strategies,” Dr. Rademakers says. Additional surprises lurk in the genes. Three years ago, she and colleagues at Mayo found that another gene, TMEM106B, which is known to modify progranulin, works protectively against the disease in certain patients.

“If you have certain genetic variants of TMEM106B, you won’t develop frontotemporal dementia — even if you have the `aprogranulin mutation,” she explains. These variants begin to explain some long-standing questions of why the disease appears in some family members and not others, and perhaps why some show symptoms of the disease decades before others.

“This was an eye-opener for me, that there would be naturally occurring genetic variants that would keep patients from getting sick. It becomes much less black-and-white science,” she says.

Dr. Rademakers is leading a worldwide effort to collect samples from frontotemporal dementia patients. “We would never have been able to locate additional relevant genes in these individuals in the past, but, with next-generation sequencing, we can look at 500 individuals from different families, and we can compare them with healthy individuals,” she says. “We can compare genetic variants and look for mutations that may increase the risk for frontotemporal dementia.”

She’s also thinking hard about therapies. Finding a means to boost progranulin, for example, might provide protection for the brain’s cells. “Our goal is to find treatments, whether it comes from regulating the genes or from manipulating the proteins, and, so, hopefully, in the next several years, we’ll have something to offer patients in clinical trials,” she says. “We went from just one gene to genes that describe more than half of patients. We now know we’re dealing with even more complexity, but every new gene we find gives us another piece of the puzzle.”