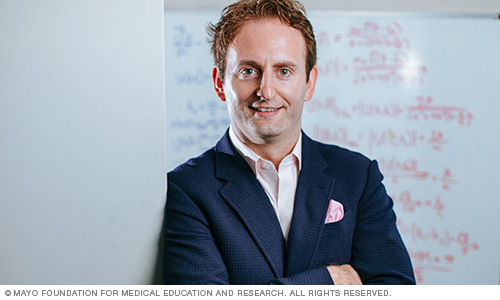 As part of a team that included physician-scientists, biomedical engineers and students, Ivan Nenadic, Ph.D., brought the math to help transplant patients know more about their new organ with fewer needles.

Ivan Nenadic, Ph.D., is equipped with dišpet, a Croatian word that means perseverance bordering on defiance.

“It’s inherent in our people,” says Dr. Nenadic, who grew up in war-torn Yugoslavia. “When facing an obstacle, you don’t get rattled. You have composure under pressure, remain level headed, and decide what’s the next step. There’s a strong faith in a better tomorrow.”

Dišpet explains much. Like how 17-year-old Ivan left home in Serbia, moving to the United States for a career in science, how ultimately, his efforts helped create a noninvasive imaging alternative to needle biopsy; and why this doctorate-level scientist is going back to school to become a physician.

“It’s known around the world that, if you want to do something serious in science, you go to the U.S.,” Dr. Nenadic says.

He landed in Rochester, Minnesota, as a 17-year-old foreign-exchange student hosted by Douglas Wood, M.D., a cardiologist, internist and medical director of Mayo Clinic Center for Innovation; and Julia Wood, a former nurse at Mayo Clinic. They soon became his family.

“I was not interested in medicine until I was essentially adopted by the Wood family,” Dr. Nenadic recalls. “I was beginning to understand that there’s a lot more to it than solving a medical question. You’re trying to help patients achieve a happy life.”

As a math, physics, and chemistry student in college, Dr. Nenadic got his first taste of biomedical research in Mayo Clinic’s 10-week Summer Undergraduate Research Fellowship (SURF). His time at Mayo Clinic Magnetic Resonance Imaging Lab convinced him that graduate school for biomedical research should be his future.

“SURF drew me to graduate school,” he says. “It was my first exposure to applied mathematics. It provided a connection between math and my desire to help patients.”

In the Ph.D. program at Mayo Clinic Graduate School of Biomedical Sciences, he joined the lab of James Greenleaf, Ph.D., a researcher in the Department of Physiology and Biomedical Engineering. Dr. Greenleaf’s Ultrasound Imaging Laboratory develops new ways to measure tissue properties with high-speed ultrasound scanners.

Ultrasound scanners are medical devices that send out a sound wave (the frequency is too high for us to hear) that pulses through the body. The waves travel until they reach a structure that stops them – be it tissue or bone - and then reflects back toward the probe. The probe reads the returning wave and creates a digital image. The ultrasound screen displays the image, showing how a fetus is growing or how heart valves are working. What can’t be seen is the math that goes into the picture. The equation behind the image takes into account how close the ultrasound device is to the tissue or organ in question, and how quickly and strongly the sound wave bounces back.

Although ultrasound technology has been around for decades, physicians and scientists are always improving it. At Mayo, Dr. Greenleaf wanted to take advantage of Dr. Nenadic’s advanced math skills, hoping the student could improve the standard ultrasound equation. So Dr. Nenadic started with the heart wall.

The Path to Invention

Ultrasounds can tell physicians if a mass in the body is filled with fluid or if it’s solid, but researchers are finding that it can do a whole lot more. Healthy human tissue is both stretchy (elastic) and interested in sticking together (viscous). In diseases like cancer or disease processes like fibrosis, tissues lose their elasticity and become progressively stiffer. In his first assignment, Dr. Nenadic expanded the use of ultrasound to examine the stretchiness of the heart wall. He “thumped” the tissue while sending ultrasound waves through it. By applying a new equation to the information received by the probe, he was able to measure the tissue’s give, or elasticity. But ultimately Dr. Nenadic concluded that elasticity was not enough. It ignored the viscosity of the tissue, which could provide information on tissue health.

So he and the team got started creating a new equation, one that takes into account both measures of tissue health. In 2011, after completing his Ph.D. in biomechanical engineering, Dr. Nenadic started working on a new technique called, “attenuation-measuring ultrasound shearwave elastography” or AMUSE. They used this technique in simulations to measure elasticity and viscosity in objects similar to human organs. With that data, they developed the equations to determine whether tissue was healthy.

“Once we developed AMUSE and proved we could measure these two properties, we had to show it was clinically useful,” he says.

For the clinical effort, Dr. Nenadic worked with William Sanchez, M.D., a gastroenterologist and internist who specializes in liver malignancies, liver failure and transplantation. One problem that transplant patients face is the need for a needle biopsy if organ rejection is suspected. Because of the changes in the structure of a liver undergoing this process, the physician and the scientist wondered if this new AMUSE technique might provide a less invasive way to get the same information.

The study based on that question, published at the end of 2016 in the journal Physics in Medicine & Biology reported the team’s results. Fifteen patients with possible acute rejection of a transplanted liver underwent both a needle biopsy and AMUSE. The results of both techniques aligned, suggesting that AMUSE may be able to differentiate between healthy livers and those undergoing the process of rejection.

Since then, Dr. Nenadic and the team have received a National Institutes of Health grant to keep studying this technique, and Mayo has filed patents to support commercialization of this innovation. Dr. Nenadic is encouraged and sees great potential in AMUSE. He says that it could be, for example, a quick and cost effective way to test for pancreatic cancer, which tends to be discovered late.

And in the future Dr. Nenadic hopes to be the physician helping guide the use of AMUSE and other innovations. After joining Mayo Clinic College of Medicine and Sciences in 2015 as a faculty member, he became a medical student at Mayo Clinic School of Medicine

“I really do care about patients,” Dr. Nenadic says as he nears completion of his second year of med school. “Giving back to humanity is more important than anything else.”

Hoping to be a physician-scientist, he thinks medical training will make him a better researcher and improve his ability to communicate research ideas to other clinicians. And in his spare time, Dr. Nenadic and a colleague have started conducting mathematical analysis of clinical data to find ways to make health care less expensive.

“We’re hoping to develop an algorithm to classify patients by risk for a health score and come up with the optimal way to do things,” he says. “You can save a lot of money and become more efficient just by applying some math.”

Solving this national issue is a daunting challenge, but Dr. Nenadic comes with plenty of dišpet.