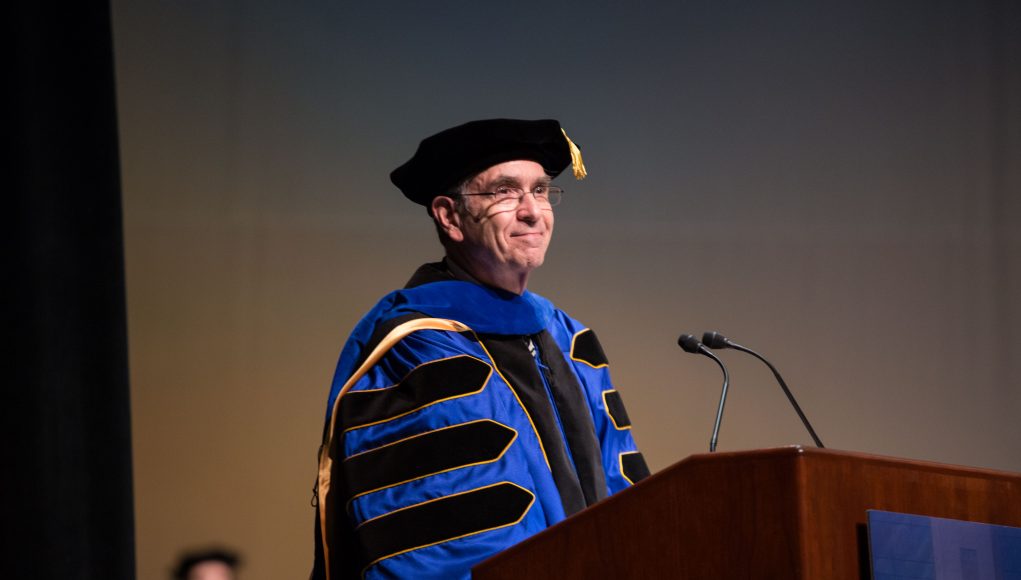 Medicine is an art as well as a science, but it is art built upon science. And if we lose the scientific foundations then it devolves basically [to a physician] being a technician.  – Robert Lefkowitz, M.D., Nobel laureate

Robert Lefkowitz ended his Nobel speech in 2012 by noting that he and his co-recipient and colleague, Brian Kobilka, M.D., began their careers as physicians. The path that began with a passion for treating patients led, ultimately, to research and the Nobel Prize in chemistry. That fact – of being a physician and researcher - was on his mind as he spoke to Discovery’s Edge during a recent visit to Mayo Clinic.

“The physician scientist has a unique view of medicine and research and how they intersect,” says Dr. Lefkowitz.

He describes how, on medical rounds earlier in his career, he would discuss the scientific basics of a patient’s condition. The diagnostic knowledge he passed on to his students was laced with findings from the latest discoveries. He extended that melding of therapy with science as he mentored postdoctoral fellows and graduate students, convinced that what makes great medical researchers is an apprenticeship with professionals who work in both hospitals and laboratories.

“If you ask who our favorite professors were in medical school, they were all physician scientists… Unless medical students are exposed to role models and get to see how fulfilling a career of making discoveries is, then we’re going to lose all of these potentially world class scientists who have no idea that they could be a scientist.”

“From the age of 8 there was no doubt in my mind that I would be a doctor. I loved science, but I had no interest in doing science, making discoveries. I mean all I wanted to do was practice medicine, heal the sick. And I understood early on that that was based on knowing a lot of science.”

“The key to my career – what changed it – was the Viet Nam War.”

Rather being drafted as a war zone physician after graduation, Dr. Lefkowitz applied for a highly competitive Public Health Service research position at the National Institutes of Health. Selected, he spent two years conducting research alongside some of the best scientific minds in the country.

“My first 18 months out of the 24 were an abject failure. I was convinced I wasn’t going to make it in science. Then during the final six months things started to click and I got a taste of it.”

That taste turned into a craving and Dr. Lefkowitz continued on as a physician scientist for the rest of his career. By identifying cellular receptors, Dr. Lefkowitz and this lab opened up a new field of pharmacology and Drs. Lefkowitz and Kobilka were awarded the Nobel. But in general, Dr. Lefkowitz says, the doctor who does research stands out in any field of medical consultants.

That’s certainly the experience at Mayo Clinic, where patients visit our Research Information Center to learn more about the research their doctor is doing. It’s also why so many patients come for complex care or a second opinion on their diagnosis.

Yet the percentage of physicians going into the lab is stagnating, and Dr. Lefkowitz laments that medical school curriculum is trending away from basic science.

“We’re going to be less likely to produce physician scientists who are scientists at the Nobel level or close to it - because students aren’t being taught with the same rigor the basic science which underpins medicine. And they’re not gaining an appreciation for how knowledge is gained and how exciting it might be.”

Why is the combination of caregiving and knowledge seeking so valuable? Insight, awareness, inspiration are some reasons given by Dr. Lefkowitz and Mayo colleagues who do both.

“I always thought it was the best of both worlds,” says Gianrico Farrugia, M.D., Ph.D., Mayo Clinic gastroenterologist, researcher and now vice president of Mayo Clinic in Florida. “I would see patients in clinic in the morning, then swap out my suit for jeans and a work shirt and cross the street to the lab in the afternoon. I am a physician first and want to cure the patients I see.”

Those unmet needs of patients prompted department heads at Mayo to embed dedicated researchers into their clinical areas decades ago. That proximity enables awareness. Physicians call on scientists for consults. That closeness is part of what we mean by an “integrated practice.” Everything we do for patients at Mayo is driven by research.

That’s one reason Mayo fosters not only its M.D.-Ph.D. program, but also offers Master’s and a Clinical Investigator program for physicians who develop an interest in research as a result of their medical practice.

What makes a great physician researcher? According to this Nobel laureate, hard work, scientific training, mentoring, and role models…as well as “really wanting it.” And he left with a compliment to Mayo’s science training: “The emphasis you place on it here is really well directed.”

Dr. Robert Lefkowitz was this year’s commencement speaker for the Mayo Clinic College of Medicine and Science. He was awarded the Nobel Prize for discovering G-protein-coupled receptors, which enabled a new generation of medications.