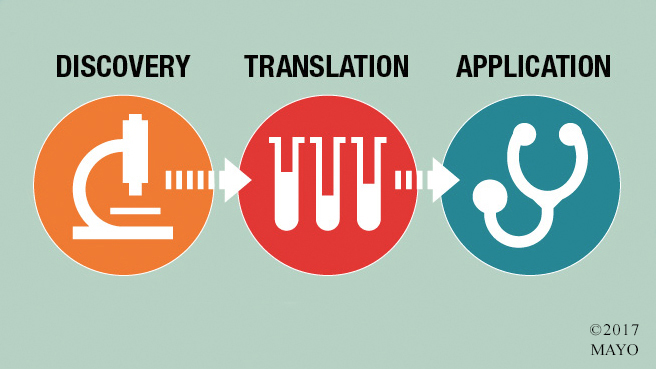 “I hope you go home at night and realize that you are changing the world.”        – Dr. Alex Parker to team members on transforming medicine

At any given time, investigators at Mayo Clinic are coming up with ideas for research studies that might improve a treatment or create a totally new therapy.

Mayo’s leadership saw that some of these approaches could be progressing faster and reach the patient’s bedside sooner if they had a little more financial help at the right point. Thus, an initiative called “Transform the Practice” was born. It means what it says, transforming the practice of medicine.

“From the discoveries in our labs to translation and testing in clinical trials to application in our practice and across the world, we are committed to accelerating research and bring new solutions to patients,” says Gregory Gores, M.D., executive dean for research at Mayo Clinic.

This means that – especially in critical areas where the need is greatest – cancer, neurologic conditions, cardiovascular diseases and organ transplantation, what a doctor does for a patient a year from now may be very different from today.

The initiative itself has spurred collaboration, which is easy to do at Mayo. Often the teams are an extension of the consultations that happen among physicians all the time. In other instances a team is carefully built based on the skills needed for the project.

In all cases, the best and brightest come together, guided by Mayo’s Model of Research, to focus on the problem and follow it through, from the discovery point all the way to a patient application. The following article is part of an ongoing series on how these fast-track research teams function as game changers to ultimately advance medical care.

A Recipe for Success

“Fruit bowl, fruit salad or fruit smoothie.” Three options for developing a stellar team, according to Alexander Parker, Ph.D., a cancer researcher, co-leader of the Genetic Epidemiology and Risk Assessment Program of the Mayo Clinic Cancer Center, and associate director of the Mayo Clinic Center for Individualized Medicine. Dr. Parker is leading a team to create new clinical tests for early detection of bladder cancer, as well as better diagnosis of kidney cancer.

The idea for the tests started over a decade ago during early conversations he had with Bradley Leibovich, M.D., chair, Department of Urology. He describes Dr. Leibovich’s frustration at that time in having to tell patients after surgery that there may be a 20-30 percent chance that their kidney cancer could come back.

“Of course, one of the first questions that a patient will ask is ‘Am I one of those people?’ and he hated not being able to tell them more about what their specific risk might be,” says Dr. Parker.

To tackle the limitations of medicine and solve the unmet needs of patients, Drs. Parker and Leibovich started thinking of how to get beyond the ‘one-size-fits all’ answer. The hope, Dr. Parker says, is to move away from, “here is what we tell everybody,” to “here is what we can tell you.”

A hallmark of the scientific discoveries at Mayo Clinic is the uniquely collaborative approach to tackling problems.

True to this philosophy, Dr. Parker suggested, “We should pull in other people who have a different skill sets, and can understand the same problem, but come at it with a completely different toolkit.”

They invited Steven Goodison, Ph.D., who had research already underway to discover molecular markers for early detection of bladder cancer; Jeannette Eckel-Passow, Ph.D., who specializes in statistical methods for analyzing molecular biomarkers; and Kaitlyn Custer, a senior program coordinator with expertise in conducting research studies in patients with cancer.

Together they submitted an application for the Transform the Practice initiative, which had launched around the same time. It called for teams that bring together experts from multiple areas to develop novel solutions that transform medicine. Their team was one of six that were chosen that year to receive additional resources and funding support.

“Once there's agreement that you all want to work on the problem, and by definition everyone knows that you’re [each] going to do it differently, how you work is the next important thing,” says Dr. Parker.

And that’s where fruit comes in. One way to function as a team is the “fruit bowl,” where Dr. Parker explains, members keep distinct boundaries and roles, and have hand-offs in a sequential manner.

Next is the “fruit salad,” which is how Dr. Parker describes their team. “You can still tell the apple from the orange bits, but you’re more mixed in,” he says. The team has more mingling and interaction, which allows members to understand each other’s worldview.

Finally, the “fruit smoothie,” where Dr. Parker has observed team members formally receiving training in one another’s fields, and the lines of expertise become blurred and blended.

He says each method has the potential to work, but the key is to identify what is best for the team.

Dr. Parker says another strategy to working well together is engagement of everyone involved – not just the teammates mentioned above – to overcome the challenges of being spread across Mayo campuses in Jacksonville, FL, Phoenix, Ariz., and Rochester, Minn.

“We wanted the coordinators, data analysts and other support staff to feel a vested interest in the problem. You're not here to just here to help us do this, you are part of the team that's going to solve this,” he says.

“I say I hope you go home at night and realize that you are changing the world here. When people ask you what you do, I hope you don't say ‘I am a study coordinator.’ I hope you say, ‘I'm trying to save people's lives,’ because that's what you’re doing.”

Accelerating the path to patients

The team already had strong scientific leads for developing new tests, but support from Transform the Practice is enabling them to recheck and confirm their results. In addition to making sure the tests work, the team wants to speed up the research process, so Dr. Leibovich and others can begin applying the test.

The team was able to pull in Andras Khoor, M.D., Ph.D., chair of the Department of Laboratory Medicine and Pathology in Florida, which is the group that operates clinical tests and interprets test results. Having his perspective shifted the way the team designed the additional studies to one that potentially allows for a faster path to patients.

“Andras said why don't we integrate your research validation with an initial clinical validation in to sort of a two birds with one stone,” says Dr. Parker. “His suggestion was great because it showed us a way to accelerate the pace even more.”

Now, the team is using clinically-certified machines and equipment to confirm three tests:

“The positive impact from Transform the Practice, for me, goes across the whole continuum of bringing together an amazing team to the reason we all did this—we really do believe that there are going to be clinical tests that will come out of this,” says Dr. Parker. “The way we detect bladder cancer, the way we predict renal cancer recurrence, and the way to predict whether renal tumors are even to cancers in the first place, will be wildly different; hopefully, in the very near future.”