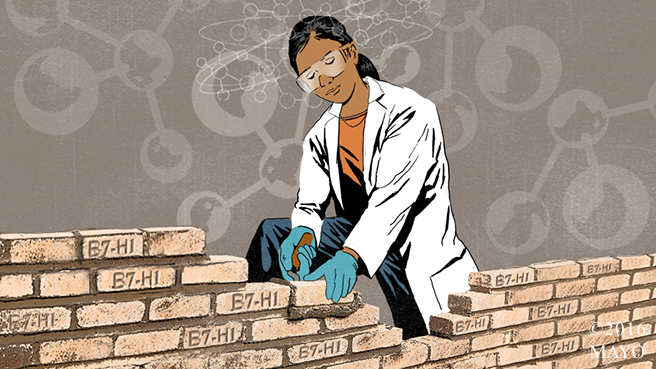 From Molecule to Melanoma: A Foundation of Research Brings New Cancer Immunotherapies to Patients

On August 20, 2015, former president Jimmy Carter announced he was battling metastatic melanoma, the deadliest form of skin cancer. Doctors removed a one-inch mass from his liver, only to find the cancer had spread to four different spots in his brain. They treated him with surgery and radiation, plus a new drug designed to reinvigorate his immune system against the remaining cancer cells. Less than seven months later, doctors declared the 91 year-old cancer-free and stopped his treatment.

He credits his successful recovery to immunotherapy. This type of drug treatment prompts the body’s immune system to refocus itself on fighting cancer and while these advances are new, the idea of immunotherapy is not. Some of the foundational discoveries were made nearly two decades ago in a series of experiments performed by Mayo Clinic researchers, including Haidong Dong, Ph.D., under the direction of Lieping Chen, M.D., Ph.D., (now at Yale).

Back then, cancer immunotherapy was just returning to favor, after more than a century of debate. In the 1890s, New York surgeon William Coley noted that one of his cancer patients went into remission after experiencing an acute infection. He began injecting his patients with a mixture of sterile bacteria to bolster their immune response, with promising results. But in the decades that followed, other researchers had difficulty replicating the success of “Coley’s toxins.” By the 1950s, many of the world’s leading minds – including the future Nobel laureate Macfarlane Burnet – believed a patient’s immune system could not recognize cancer cells as alien because the cells grew out of the patient’s own body.

Identifying the B7 Family

Before coming to Mayo Clinic, Dr. Chen had discovered two molecules (named B7-1 and B7-2) that could activate T cells. T cells are part of the immune system, and have many actions as part of immune response. B7-1 and B7-2 are members of the B7 family of proteins, and seemed to act like miniature accelerators, kicking T cells into gear. When Dr. Chen arrived at the Mayo Clinic, his research team’s first assignment in the lab was straightforward: search for the brothers, sisters, and cousins of B7-1 and B7-2 using genetic clues provided by Dr. Chen.

With the genetic clues in hand, the gene was isolated out of placenta cells and named B7 homolog 1 or B7-H1. Dr. Chen designed experiments to test whether B7-H1 paired up with other proteins like CD28 and CTLA-4, known partners of the B7 family in stimulating the immune response.

To his surprise, it didn’t interact with them at all.

“We were pretty disappointed,” recalls Dr. Dong. “It didn’t pass the gold standard for belonging to this family.”

After designing additional experiments that were performed by Dr. Dong, Dr. Chen discovered B7-H1 did something totally unexpected. It triggered the production of a signaling molecule called interleukin-10 that represses the immune response. He also found that unlike its cousins B7-1 and B7-2, which promoted the proliferation of T cells, B7-H1 seemed to reduce their numbers.

Dr. Chen suspected that the B7-H1 molecule may somehow protect cancer cells from T cells. To explore this idea further, Dr. Chen and Scott Strome, M.D. looked to see if the molecule was active or expressed on the surface of cancer cells. They analyzed a variety of different cancers, including lung, ovarian, breast, and melanoma, and found that many cancer cells had B7-H1 molecules on their surface. They also discovered that blocking the B7-H1 molecule with B7-H1 antibodies prevented the cancer cells from reducing the number of T cells. This allowed the T cells to attack the cancer cells and was a major turning point in the field of immunotherapy, said Larry Pease, Ph.D., a Mayo Clinic immunologist who worked down the hall from Dr. Chen and Dr. Dong.

“The earliest immunotherapy approaches tried to activate T cells in patients to fight their own cancer,” says Dr. Pease. “In general, those strategies were not very successful, in part because there are a whole series of networks and barriers in place to prevent the body from attacking itself.”

Dr. Chen realized that in the search for the immune system’s accelerators, they had stumbled upon the brakes.

These brakes, or immune checkpoints, are “off-switches” that are hardwired into the immune system to keep it from harming normal tissues and cells. Cancer cells often co-opt these checkpoints to avoid attack by the immune system. Mayo Clinic researchers understood that B7-H1 is a checkpoint protein that plays an essential role in this molecular subterfuge. Basically, B7-H1 – which is now called PD-L1– sits on the surface of some normal cells and cancer cells. When it pairs up with its receptor partner PD-1 on T cells, the interaction suppresses the immune response.

Today, drugs that target these checkpoints are among the most promising forms of cancer immunotherapy. The checkpoint inhibitor pembrolizumab, known commercially as Keytruda, is based on an antibody against PD-1. Keytruda was fast-tracked and received approval by the FDA in 2014 for melanoma. Mayo Clinic was the second site in the world to offer the drug to its patients.

While exciting, the fact remains that the drug may not work in every patient. President Carter is one of the lucky ones, and Dr. Dong would like to know why. Right now, there is no way to tell which patients will completely respond to the treatment. The current measures of response – such as CT scans at tumor sites – are crude at best.

Dr. Dong is currently developing molecular markers that can track a patient’s immune response to checkpoint-inhibitor therapies. He and his colleague, Mayo oncologist Roxanna Dronca, M.D., have already identified a number of markers that T cells express when they are engaged in combat with tumor cells. These biomarkers can detect when Keytruda is working in patients, even when CT scans cannot.

Eventually, he would like to see the checkpoint inhibitors being used to treat other cancers in addition to its current indications, melanoma and non-small lung cancer. Mayo Clinic researchers have shown that many solid cancers contain the target B7-H1 molecule, suggesting it could have widespread applications beyond melanoma and non-small lung cancer.

“Many discoveries happen simply because of the acquisition of new knowledge,” says Dr. Pease. “In this case, the discovery was trying to understand how the immune system works. Of course there's always going to be the notion in the back of your mind that if we understand the immune system, maybe that could be useful in fighting infections or treating cancer. You have to support the process of discovery, and see where it takes you.”