Home More Stories Lessons on Collaboration from a Laureate 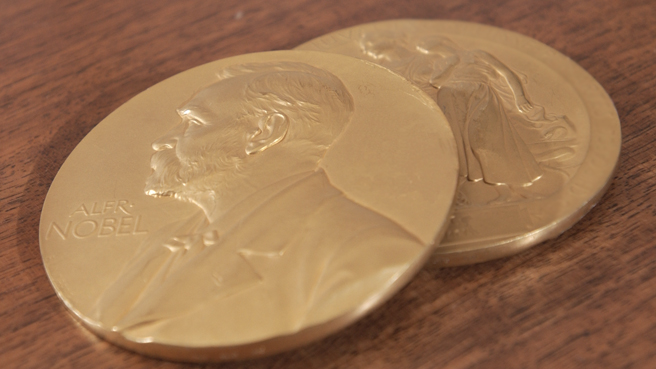 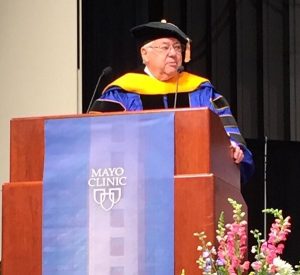 Nobel Prize recipient Dr. Michael Brown gave the commencement address at Mayo Clinic this year. He also talked with Discovery's Edge about how important scientific collaboration had been to his career. Here is that story.

If there’s one thing you can say about Mayo Clinic, it’s that the institution supports partnerships. Will and Charlie Mayo combined their collective knowledge and skill to provide a template that underpins the workings here almost 100 years later. But Mayo Clinic is perhaps the exception to the rule. Michael S. Brown, M.D., Nobel laureate and half of the longest research partnership in biology, sees a pretty harsh environment for scientific collaborations like the one he has with Joseph Goldstein, M.D.

“It’s very hard when I talk to young scientists to interest them in this idea of having a scientific partner,” Dr. Brown said. “They think science is an IQ test.”

That’s no surprise. Researchers vie for placement, advancement and funding, and finally recognition through publication. Science as a competition where the smartest scientist wins makes sense to many hoping to be in first place. But even first place doesn’t guarantee success.

Dr. Brown said he was shocked on match day to open up the envelope (as many graduates still do today) and see he’d been chosen for one of the seven internal-medicine intern positions at that esteemed hospital. One of the six others was a South Carolinian named Joseph Goldstein. This graduate of a relatively unknown medical school in Texas surprised Dr. Brown by seeming to know more than any of the other interns, from how to do a lumbar puncture to liver biopsies.

The two young interns eventually became friends over the midnight meal served for hospital staff in the Mass General cafeteria. “It was an interest in the basics of disease that threw us together,” said Dr. Brown. “And it also happened that we both liked to play duplicate bridge.”

After their patients were seen to, Drs. Brown and Goldstein would talk about diagnoses, what was known about a disease or why a patient might develop one disease instead of another. These discussions laid the groundwork of respect necessary for the robust partnership the two scientists have nurtured over the last four decades.

“We didn’t plan to totally dissolve our egos and join them together,” said Dr. Brown. “That was never the plan. As we started to collaborate more and more, sharing ideas, planning experiments, and reviewing data together we gradually abandoned our individual identities.”

But even then it was very difficult to merge the achievements of their partnership in a culture that rewards individual achievement.

They were to find the culture they needed in an unexpected place – Dallas, Texas.

“The year was 1971,” explains Dr. Brown. “Kennedy had been assassinated in Dallas in 1963 and Dallas was not exactly a popular place.” But it was the right place for these partners.

“We were tremendously helped by the administration and fellow faculty at UT Southwestern,” said Dr. Brown. “I do not think we could have done this at almost any other medical school.” Dr. Brown and Dr. Goldstein were able to advance and develop their careers in exact parallel. Their achievements were accepted as a joint venture, without regard for who did what or who thought of what idea.

“We had many long talks about this,” says Dr. Brown. “We said if we were going to set up a true collaboration, we aren’t going to be able to take individual credit for anything that comes out of this collaboration.” A comment by one could spark a great idea from the other; something Dr. Goldstein reads might lead to a fruitful discussion with Dr. Brown the next day. “You’ll never be able to say that’s Joe’s idea or Mike’s idea,” Dr. Brown says. Together though, having a scientific partner to bounce ideas off of has been a “huge source” of insight and inspiration, according to Dr. Brown.

And while they’ve had many excellent projects, it was a joint project early in their association that led the team to receive a Nobel Prize.

"...we aren’t going to be able to take individual credit for anything..."

After their internship and residency at the Massachusetts General Hospital, both Drs. Brown and Goldstein moved to the National Institutes of Health (NIH) for research fellowships. While helping to care for patients with unusual diseases at the NIH hospital in Bethesda, Maryland, the doctors cared for two children permanently hospitalized due to recurrent heart attacks. The children, an eight-year-old boy and his six-year-old sister had blood cholesterol levels that were 10 times above normal, even when their diet did not contain any cholesterol. Doctors knew that the cholesterol built up in their coronary arteries until a blockage caused a heart attack, but they didn’t know why.

“First of all it was very frustrating for us as physicians because there was nothing we could do for these children,” says Dr. Brown. “Since we were not pediatricians and trained in pediatrics we were not accustomed to how sad it is to have a sick child.”

The experience so moved Drs. Brown and Goldstein that they resolved to try and figure out what was wrong with these children. It was an important medical question, too. “These children are one in a million,” explains Dr. Brown. “But one out of every 500 people has a single mutant low-density lipoprotein-receptor gene; and they don’t have levels of a thousand but they do have levels of three or four hundred.” This makes the genetic mutation quite common for a genetic disease and increases a carrier’s risk of early-age heart attack.

In 1974 the partners joined their laboratories at the University of Texas Southwestern Medical Center. Over the next 10 years, their work, culminating in the Nobel Prize in Medicine or Physiology in 1985, uncovered the cause of the disease afflicting the brother and sister the doctors met at the NIH.

"...when we got the answer the two of us would just look at each other and be so happy.”

The disease, called familial hypercholesterolemia, is a genetic mutation that affects the amount of low density lipoprotein (LDL) receptors that are found on special regions of cell membranes. When the LDL cholesterol binds to that region, the cell membrane sags into the cell, surrounding the LDL and carrying that particle into the cell. Once in there, the cholesterol is taken apart by a specialized part of the cell that contains enzymes to break down molecules like cholesterol or protein. People with the familial hypercholesterolemia mutation cannot produce the normal amount of LDL receptors.

But that wasn’t what the partners expected to find.

It had been known from previous work that cells in tissue cultures could make their own cholesterol, and from animal studies that feeding cholesterol inhibited the amount of cholesterol made in the liver. These facts suggested that too much cholesterol would inhibit the first enzyme in the pathway of cholesterol production, and turn off further production.

Based on this idea, Drs. Brown and Goldstein hypothesized that the children with LDL ten times above normal had a defect in the enzyme that limited cholesterol production.

After lucking into an opportunity to gather skin cells from one of these one-in-a-million children (“If any scientist ever tells you that luck played no role in their life they’re a liar,” adds Dr. Brown.), the partner’s initial theory seemed correct. They were thrilled. “A huge part of the joy of discovery is sharing it,” says Dr. Brown. “When we finally figured out how to do the experiment right, when we got the answer the two of us would just look at each other and be so happy.”

But as often happens in scientific research, the first success did not provide the final answer. The problem was not with the off-switch on the first enzyme in the cholesterol synthesis process. When the scientists added pure cholesterol, not cholesterol in the form of an LDL particle, to cells, the enzyme in question switched off as it would normally.

“We were devastated,” said Dr. Brown. But undaunted. “And here’s where I give credit to our medical background,” he says, “We weren’t frightened even though it is now a different type of problem, a problem of cell biology.”

Eventually, by labeling LDL particles with a radioactive substance that could be traced, the partners discovered that the problem was getting the LDL into the cell in the first place. “We eventually found that the way a normal cell takes it up is that the normal cell makes a receptor protein on the surface,” says Dr. Brown. “And the genetic defect is in this receptor protein but no one knew before that you could have a receptor that would trap something and then take it into a cell.” The children could not take up the LDL particle, so they couldn’t release the cholesterol, and therefore couldn’t use it.

Now, thanks to their work and the work of many other scientists, familial hypercholesterolemia is well understood as a genetic disease, and provides a basis for understanding other genetic diseases related to cellular receptors.

And it all started over midnight meals in the cafeteria, with discussions that solidified the respect and esteem of two colleagues. “You have to have total respect for one another,” says Dr. Brown. “Quite often we disagree about a next direction, and I’ll go home after thinking, that’s stupid, we’ve got to do it my way.” But with respect comes the understanding that there must be something that Dr. Goldstein knows that I don’t know, Dr. Brown explains. Often Dr. Brown says he’ll think about the disagreement overnight and in the morning go into the lab and say, “I think you were right. And he’ll [Dr. Goldstein] say no I think you’re right.”

While Dr. Brown and Dr. Goldstein hold the record, by their assessment, for longest scientific partnership, they could not have achieved their success without the advances made by the basic, or discovery scientists. “The basic scientists created all these incredible tools,” says Dr. Brown. He explains that once they discovered receptors, they relied on the innovations for isolating proteins and cloning. “We did have the courage to try to learn these techniques,” says Dr. Brown. Courage perhaps bolstered by having a scientific partner?

“Look, it’s the same reason I’ve been married for 52 years,” says Dr. Brown, “It’s just fun to go through life with a partner. I happen to like to share these experiences.” And the memories as well, says Dr. Brown. “It’s nice to have a partner now as we’re getting older because half the time I can’t remember something and he does,” jokes Dr. Brown. “It’s a huge benefit.