Home More Stories New MRI Scanner One of a Kind 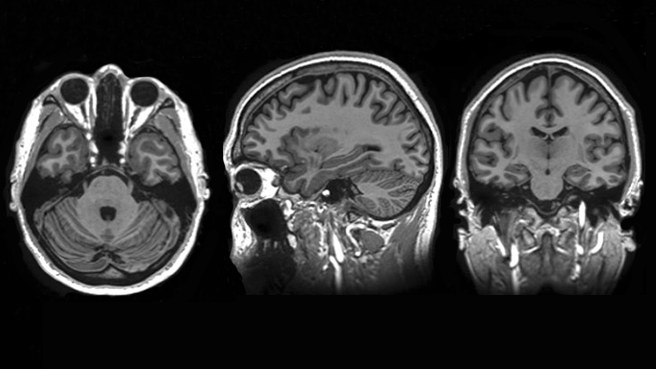 The reality of magnetic resonance imaging, or MRI, machines is one of size — large, both in cost and physical space. This, then, restricts access to needed medical diagnoses.

But what if you could shrink both and still produce high-quality MR images? Or even improve the quality of images that can be obtained today? 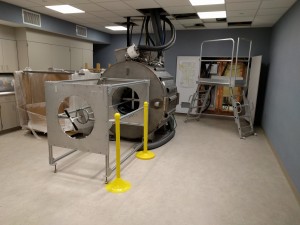 Mayo Clinic researchers, in a partnership with GE’s Global Research Center and funding through a National Institutes of Health Bioengineering Research Partnership grant, are hoping to answer that question and many others, now that a new, one-of-a-kind compact 3-Tesla MRI scanner has been installed in Rochester.

“A lot of teamwork went into the development, construction and fine-tuning of the machine, and even more will go into determining the full scope of what physicians are able to do with the machine to improve patient outcomes and experiences,” says Matt Bernstein, Ph.D., a medical physicist in Mayo Clinic’s Department of Radiology. “The smaller design actually permits increased scanner performance, because both the electrical power requirements and physiological limitations imposed by a whole-body MRI scanner are greatly reduced.”

“While smaller, compact scanners could accommodate nearly half of our clinical MRI exams, the main focus of its design is to image the head,” says John Huston, M.D., a neuroradiologist at Mayo Clinic. “But extremities such as wrists, feet and knees, as well as infants, can be studied.”

Already, the work done for the compact 3T scanner is expected to benefit the Proton Beam Therapy Program. Just like images from the compact 3T, MRI images used for radiation therapy planning with the Proton Beam program require the highest possible geometrical accuracy. Dr. Bernstein says his lab has developed ways to reduce distortion near the edge of scanner images.

“A lot of the technology, developed by Josh Trzasko, Ph.D., Shengzhen Tao, M.S., Paul Weavers, Ph.D., and Yunhong Shu, Ph.D., spins off directly to the radiation therapy planning at the Proton Beam, so we’re very excited about that,” Dr. Bernstein says. 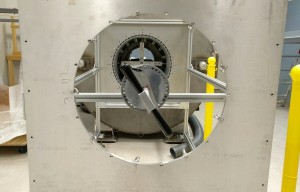 The compact 3T is a research prototype, and not yet a commercial product. Vital to the research program’s success, Dr. Huston says, are the patients who volunteer to be scanned. He adds: “The researchers will be working with patients who have focal diseases, like brain tumors and aneurysms, as well as diffuse diseases, like Alzheimer’s disease and multiple sclerosis.”

“We are incredibly lucky for the generosity of our patients, that they are willing to have additional testing to help others in the future,” he says. “In general, a lot of what we’re going to do will not help them directly. Instead, it is helping to move science forward, rather than improve or impact their individual care.”

The project has been eight and a half years in the making, with teams from both GE and Mayo working to develop the machine that has been installed at Mayo. The opportunities for multidisciplinary collaboration are part of the appeal, Dr. Bernstein says. “Already, physicians who are focused on pediatrics, musculoskeletal, radiation oncology, deep-brain stimulation, and Alzheimer’s disease are hopeful that the scanner will bring new insights and breakthroughs to their fields.”

“We’re interested in not only fulfilling the requirements of the original NIH grant, but moving forward and investigating new applications,” Dr. Huston says. “Traumatic brain injury, MR elastography, tractography in the brain — those will be novel opportunities to move the technology forward.”

This type of compact MRI machine is important for many reasons, from patient access to the practical aspects of placing or “siting” an MRI scanner at a particular location.

“We do believe that there is a global shortage of MR access, which we might not feel severely in Rochester, because we have 30 clinical MR systems that are busy all the time,” Dr. Bernstein says. “But in most parts of the world, patients simply do not have the access to the MR exams they need.”

In addition, standard MRI machines use large quantities of liquid helium to keep the superconducting wires of the magnet extremely cold, approximately minus-452 degrees Fahrenheit. Helium is an expensive, nonrenewable resource, of which there have been recent worldwide shortages. Traditional, whole-body MRI scanners use up to 2,000 liters of liquid helium, though this compact MRI scanner uses only about 12.

This reduction, in addition to saving money, solves another issue, related to siting. With 2,000 liters of helium, a reinforced vent stack that leads to air outside of the building is required, in case the helium escapes. Because the compact 3T uses so little helium, its installation at Mayo was considerably simplified. No vent stack was required, so the installation time and costs were reduced. Also because the compact scanner weighs about one-third as much as a standard 3T MRI machine, it can be transported more much easily.

Though previous attempts by others to build smaller MRI scanners have not produced very encouraging results, Mayo Clinic’s investigators believe the Bioengineering Research Partnership has developed the necessary science and technology needed to address the previous problems, and the time is right for success.