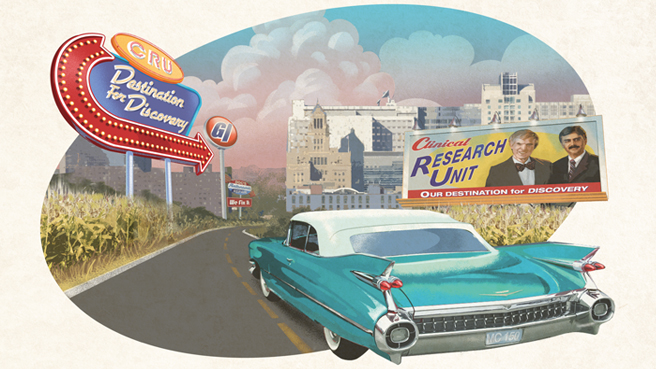 The road to developments that change medicine is littered with seemingly great ideas. In the early stages, that road meanders like a mountain trail with many ideas falling off course and discarded. But once an innovative medical concept reaches the point of clinical research, the road turns to superhighway, running straight through a patient-study unit nestled on Mayo Clinic's campus in Rochester, Minn.

The Clinical Research Unit (CRU), part of the Center for Clinical and Translational Science at Mayo Clinic, is the unsung waypoint through which any number of landmark patient studies have traveled en route to improving the lives of millions of people.

The Clinical Research Unit looks like a typical hospital floor, but the staff, from doctors and nurses to pharmacists and dietitians, are research personnel. And the patients are actually research volunteers participating in clinical studies.

Although the list of medical milestones reached via the Clinical Research Unit could fill an atlas, research in five areas stands out:

Robert A. Rizza, M.D., made major advances in diabetes research with studies conducted in the Clinical Research Unit.

Fifty years ago, treatment of diabetes involved considerable conjecture. How much insulin did a patient need to maintain a safe glucose level? An error in either direction risked dangerously high or low blood sugar.

Lacking a clear understanding of the mechanisms underlying diabetes, physicians weren't sure.

In a series of clinical studies, researchers in the Clinical Research Unit found answers that revolutionized diabetes treatment.

By injecting tracers into the bloodstreams of study participants, the researchers were able to follow the intricate and previously unmapped pathways of metabolism. They learned that the liver releases small amounts of stored glucose when blood sugar is low, keeping glucose concentrations constant between meals. More insulin is needed with a meal to metabolize food.

"Very quickly, we understood what needed to be done to bring glucose levels down, and the insulin doses necessary to accomplish that," says Robert A. Rizza, M.D., an endocrinologist at Mayo Clinic in Rochester, who led the diabetes research studies.

Intensive insulin therapy, in which patients inject short-acting insulin before each meal and long-lasting insulin for coverage between meals, became standard treatment. And as a result of the studies, the American Diabetes Association declared that "the most fundamental questions" about diabetes were finally addressed.

Other research applications include the development of precise tools for measuring blood glucose and improved insulin and insulin pumps that provide constant therapy.

"To create therapies that benefit patients, we need to precisely measure glucose production and uptake, protein metabolism, the effects of diet and exercise — the list is long," Dr. Rizza says. "These sophisticated studies could not be done without the Clinical Research Unit."

In part for the knowledge gained by his diabetes discoveries, Dr. Rizza was awarded the prestigious Banting Medal for Scientific Achievement in 2010 by the American Diabetes Association. The award is named for the co-developer of insulin therapy. A 3-D reconstruction of a CT scan showing the varying bone density in one small section of bone in one of Dr. Khosla's osteoporosis studies.

When endocrinologist Sundeep Khosla, M.D., joined Mayo Clinic in Rochester 25 years ago, brittle bones were considered as inevitable a part of aging as gray hair or wrinkles.

"You got old and you got hunched over, and that's all there was to it," Dr. Khosla says. "We didn't really understand osteoporosis."

Much more is understood now, thanks to Mayo Clinic's research into the complex biology of bone, including its formation and degeneration. That work proved essential for the development of medications to prevent osteoporosis, many of them initially tested in the Clinical Research Unit. Future therapies may actually repair brittle bones.

"We are right on the verge of being able to reverse the disease," Dr. Khosla says.

That status is an astonishing turnaround, spurred by several Mayo Clinic discoveries.

In the 1980s, after performing initial studies in the Clinical Research Unit, researchers assembled one of the original systems for measuring bone density, making it possible to diagnose osteoporosis before a patient developed a fracture.

Later, Dr. Khosla found that estrogen, the hormone that regulates female bone metabolism, regulates bone metabolism in men as well, and that declining estrogen levels can lead to osteoporosis in aging men just as in postmenopausal women. Those findings have profound implications for the diagnosis of osteoporosis in men and the development of treatments.

Newer studies have focused on bone formation in children and adolescents as a means of predicting fracture risk with aging.

"Basic knowledge of disease pathways starts in the laboratory and must be translated into an understanding of disease processes in humans," Dr. Khosla notes. "The Clinical Research Unit is the crucial intermediary."

Chronic digestive problems with no obvious underlying cause account for 5 percent of all visits to primary care providers nationally, according to the Centers for Disease Control and Prevention. Besides severely reducing quality of life, difficulties moving food through the gastrointestinal (GI) tract may be a sign of serious disease. Yet treatment is often challenging because many different problems can cause GI symptoms.

Indeed, "over the last two decades, essentially every diarrhea and constipation drug tested either before or during presentation to the Food and Drug Administration has been tested at the Clinical Research Unit at Mayo Clinic," says Michael Camilleri, M.D., a gastroenterologist at Mayo Clinic in Rochester.

One of the tests uses 3-D imaging to measure the stomach's ability to expand after a meal.

"That noninvasive test allowed us to evaluate the differences in stomach size between people of normal weight and otherwise healthy people who are overweight," Dr. Camilleri says.

Researchers discovered that people who are overweight tend to have smaller stomachs, but eat more frequently, a finding that has implications for treating obesity.

Another Mayo Clinic test measures the rate at which food moves through the colon.

"Literally, tens of thousands of patients have had this test done as part of their evaluation for chronic constipation, abdominal pain or diarrhea," Dr. Camilleri says.

"Our studies in the CRU have shown that a number of peripheral GI mechanisms are not working well in these patients," Dr. Camilleri says. "It is not all in the patient's mind."

Often the butt of jokes, snoring is actually no laughing matter. Loud snoring can be a sign of obstructive sleep apnea, in which breathing repeatedly starts and stops.

Trailblazing research in the Clinical Research Unit has shown that sleep apnea can cause high blood pressure, which in turn can lead to stroke, atrial fibrillation and heart attack.

"By attacking sleep apnea, which is a relatively treatable condition, we can more easily prevent or treat cardiovascular disease," says Virend Somers, M.D., Ph.D., a cardiologist at Mayo Clinic in Rochester.

Dr. Somers was among the first researchers to focus on sleep disorders and cardiovascular disease. Early in his career, he measured blood pressure levels of 200-plus mm HG in a clinical exam of a patient experiencing sleep apnea.

"It had never been recognized that blood pressure reached this high level during sleep," he says.

Dr. Somers wondered if easing a patient's nighttime struggle to breathe would result in lower blood pressure. In studies in the Clinical Research Unit, Dr. Somers and his colleagues found that patients treated with continuous positive airway pressure (CPAP) during sleep did indeed have lower blood pressure than untreated study participants.

Still, other intriguing questions remain about the relationship between sleep apnea and the heart. Mayo Clinic researchers are examining the size and functioning of the heart to determine if sleep apnea causes atrial fibrillation, which can lead to heart failure. Dr. Somers notes that a study of patients hospitalized at Mayo Clinic after nighttime heart attacks found that a majority had undiagnosed sleep apnea.

"The next step," he says, "is randomized controlled trials in the CRU that specifically define whether treating sleep apnea improves outcomes for atrial fibrillation and prolongs life."

There are no barriers for scientists in the Clinical Research Unit, says Michael J. Joyner, M.D., Mayo Clinic anesthesiologist and physiologist.

Microneurography, the tracking of nerve impulses while awake, helps researchers understand blood pressure, metabolism, aging and other important functions. Here, a volunteer participates in a study on how insulin activates the sympathetic nervous system.

If the human body is a machine, then researchers are uncovering its inner workings — and what makes those mechanisms wear out and break down.

Much of this groundbreaking work focuses on the autonomic nervous system, which acts below the level of consciousness to regulate heartbeat, blood and oxygen flow, metabolism and perspiration, among other functions.

"Over the last 30 years, we've shown that the autonomic nervous system is a key determinant of survival in a wide range of diseases," says Michael J. Joyner, M.D., an anesthesiologist and physiologist at Mayo Clinic in Rochester.

Studies into the complex interplay of blood and oxygen flow and metabolism, along with the effects of exercise and a patient's age and sex, are yielding game-changing insights into treating physiological health problems.

"It turns out that the role of the autonomic nervous system in regulating blood pressure is different in men and women, and changes dramatically as women age," Dr. Joyner says. "This has major implications for how we should prevent and treat hypertension in older women."

Other research in the Clinical Research Unit is analyzing the effects of aging and exercise on cerebral blood flow, which influences cognitive function. Studies have shown that higher levels of physical activity in older adults improve blood and oxygen flow in the brain, which may explain why regular aerobic exercise seems to improve cognitive function in older adults.

Dr. Joyner's team works closely with doctors specializing in bone, muscle, the cardiovascular system, diabetes, exercise and aging. What sets the Clinical Research Unit apart is its ability, through casual conversation as well as formal collaboration, to spark creativity among all these experts and their teams.

"We're able to continuously interact. In typical Mayo fashion, there are no barriers," Dr. Joyner says. "The cross-talk permits us to make more progress and to bring a range of tools to bear on these complex problems, and ultimately help patients."