The Futurist: Mayo Leadership in Pharmaco-genomics

While some would like to drape the mantle "The father of pharmacogenomics" on Richard Weinshilboum, M.D., the scientist parries: "The only thing that I'm father of is my two children."

Either way, no one can argue that this charming, self-deprecating, diminutive gentleman is a titan in his field; and a giant reason Mayo can claim three decades of leadership in propelling this exploding discipline out of the starting gate. His research set the stage for applying genetic variation to individualized drug treatment.

"He is someone who really has the vision of where the science is going, at the highest level," says colleague Liewei Wang, M.D., Ph.D. "He's always looking ahead."

Visitors to the lab see the excitement and enthusiasm conveyed through his nearly constant smile and an eagerness to talk about the future. They sense urgency about what must be done next in genomics — a word that did not exist when he began his career at Mayo Clinic in 1972.

"My wife and I arrived in the middle of one of our colder winters. On New Year's Eve it was 25 below and I assured her we wouldn't be staying in Minnesota more than five years," laughing as he retells the familiar story. "Thirty-eight years later we're still here, and we're just getting started."

That attitude may help explain why Mayo recently received the third renewal of several five-year, multi-million dollar grants courtesy of the Pharmacogenomics Research Network (PGRN) — a nationwide network of prestigious interdisciplinary research groups launched by the National Institutes of Health (NIH) in 2000. Of the 18 proposals approved for large genomewide studies under collaboration with the Riken Center for Genomic Medicine in Japan, fully one-third are based at Mayo.

"Modern drugs are very powerful agents that can do great good but also great harm," says Dr. Weinshilboum. "Pharmacogenomics studies the effects of genes on human response to drugs, with the goal of minimizing drug reactions that can be life-threatening and maximizing the desired therapeutic effect that can cure terrible diseases."

In the late 1990s, as the Human Genome Project was approaching its conclusion, the National Institute of General Medical Sciences (NIGMS) invited Dr. Weinshilboum, a pharmacology physician-researcher, and the Dasburg Professor of Cancer Genomics Research, to chair a task force. Its objective: Find the best way to use the new genomic knowledge to accelerate and translate the genetics of drug response to the bedside.

The Human Genome Project, along with new technologies such as genome-wide association studies, changed the nature of the science from pharmacogenetics to pharmacogenomics — from studying one gene at a time to studying all of our 25,000 genes at once. Earlier studies focused on a single gene or just a couple of variations in the DNA sequence, but the effect of drugs usually involves multiple genes. Finding those genes, however, is difficult and expensive: The chips for interrogating a million markers across the genome are about $500 each, and each study involves thousands of patients.

The task force recognized the need for huge numbers of samples, teams of scientists with differing but complementary expertise from multiple research centers and a single, central database — all of which meant that large grants were required. The members recommended forming the PGRN. The man who led the mapping of the genome for the NIH has no doubt about Dr. Weinshilboum's leadership in the PGRN and in the science.

"Dick is one of the foremost pioneers in the field of pharmacogenomic research," says Francis Collins, M.D., Ph.D., now director of the NIH. "His landmark studies, dating back to the 1970s, have served to open the door to the era of personalized medicine, in which doctors will use genetic information to make sure that each patient receives the right drug at the right dose at the right time.

"Dick's stellar combination of scientific insight and clinical expertise is highly regarded among his peers. Over the years, we at the NIH have been privileged to draw upon his many talents. His service has included membership on the National Advisory General Medical Sciences Council and, most recently, on the National Advisory Council for Human Genome Research."

From the beginning Mayo Clinic was approved as one of the centers for the five-year PGRN grants, with Dr. Weinshilboum as principal investigator. Protesting that he's "only the guy who's been doing this for 30 years," he credits the broader team for Mayo's success. In addition to clinical investigators such as James Ingle, M.D., who leads breast cancer studies and David Mrazek, M.D., who heads studies of depression, the group includes Dr. Wang, who specializes in functional genomics — how genomic variation can change either the way an enzyme works or its amount; Eric Wieben, Ph.D., a biochemist who directs Mayo's Genomics Research Center; biostatistician Daniel Schaid, Ph.D., and informatics specialist Christopher Chute, M.D., Dr.P.H.

"Mayo is perceived as a leader because of a group of talented people here," says Dr. Weinshilboum. "Our collaborations include an entire network across the United States, including most of the NIH institutes, as well as international collaborations with Canada, Germany and Japan." 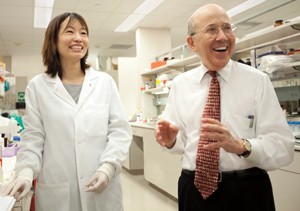 Of vital importance is the collaboration with the Riken Center for Genomic Medicine in Japan. While the PGRN has a huge collection of DNA samples with accompanying clinical histories, Riken can offer extraordinarily powerful genome-wide technologies to genotype them.

"We should be grateful to the Japanese taxpayers for their enlightened approach," says Dr. Weinshilboum. "They are spending tens of millions of dollars looking for genes that we would otherwise not suspect of having a role in drug response."

The first publication from the Riken-PGRN collaboration is a new observation based on a Mayo study slated for publication in the Journal of Clinical Oncology. The research identified a new gene that, if the research is verified, can predict whether some women are at risk to develop side effects from certain breast cancer drugs.

Great strides have been made in breast cancer treatment in recent years. One of these is aromatase inhibitors, which are drugs that, following primary treatment, decrease the rate of recurrence of estrogen receptor positive breast cancer by 50 percent in postmenopausal women.

"Aromatase inhibitors produce a truly dramatic result, but they are two-edged swords," says Dr. Weinshilboum. "In many women, they cause joint pain that is so severe that they stop taking the drug within the first year despite the fact that the recommended course of treatment is five years."

To study the mechanism behind this drug side effect, the Mayo PGRN, in a project led by Dr. Ingle, used DNA samples from the largest aromatase inhibitor study ever done. The study had been run by the National Cancer Institute of Canada and involved collaboration with National Cancer Institute groups throughout North America. The Mayo group used DNA samples collected during that effort to study the genomes of women who developed severe joint pain following treatment with aromatase inhibitors after breast tumor removal. If verified, the discovery could help predict which women are at greatest risk of joint pain. Tailoring drugs and dosages to fit an individual's genomic makeup is a common topic these days, but not when Dr. Weinshilboum began his career at Mayo. Advances in pharmacogenetics began as far back as the 1950s, but the impact on patients was minimal. In 1980, Dr. Weinshilboum made a groundbreaking discovery that has helped children with acute lymphoblastic leukemia, the most common cancer in children.

The study demonstrated that the same dose of an anti-cancer drug, 6-mercaptopurine (6-MP), helped cure most children with the disease but injured others because of a common gene variation that controls the activity level of an enzyme known as thiopurine methyltransferase or TPMT. In 1991, Mayo developed the TPMT blood test, which allows oncologists to calculate the optimal dose of thiopurine drugs for the individual child. In 2002, Dr. Weinshilboum testified before the first Food and Drug Administration (FDA) hearings, and 6-MP became the first drug to be "relabeled" to help make physicians aware of this pharmacogenomic variation.

Advances in pharmacogenetic studies of other drugs soon led the FDA to make similar recommendations, and Mayo played a major role in two of them. They are: irinotecan, used to treat colon cancer, and tamoxifen, used to treat women with estrogen receptor positive breast cancer. Matthew Ames, Ph.D., and Matthew Goetz, M.D., collaborated with Dr. Weinshilboum on these topics.

In 2005, Dr. Wang showed that some people have a genetic makeup whereby improperly formed proteins, which are essential to metabolize thiopurine drugs, are either destroyed rapidly or collect in a structure called an aggresome. Dr. Wang also discovered a gene that alters the effect of gemcitabine, the standard drug used to treat pancreatic cancer.

Dr. Mrazek, a pioneer in the role of pharmacogenomics in psychiatric drugs, is the director of the Mayo Genomic Expression and Neuropsychiatric Evaluation (GENE) Unit. Finding an antidepressant that works is usually a frustrating process of trial and error. In collaboration with Dennis O'Kane, Ph.D., and colleagues in Mayo's Department of Laboratory Medicine and Pathology, Dr. Mrazek has applied genetic tests of P450 genes that encode enzymes that metabolize commonly prescribed antidepressant drugs. Dr. Mrazek's recent book, "Psychiatric Pharmacogenomics," cites many cases where the test has been used successfully to prescribe individualized antidepressant drugs.

Thirty years ago, hypertension specialist Stephen Turner, M.D., was awarded one of the first grants to study the relationship between genetic variation and common disease. His research correlates the whole genomes of 4,000 study participants with decades of their medical records. He identified chromosome 2 as a contributor to hypertension and also helped to establish that multiple genes affect the development of hypertension.

The combination of pioneering pharmacogenomics researchers, extensive banks of DNA tissue with correlating clinical records and hallmark collaboration suggest that Mayo will continue making significant contributions to the field.

Parallel advances in biochemistry, molecular biology, cell biology, genomics and technology are hurtling pharmacogenomics into the future. The field is bound to offer surprises.

"Who'd have guessed that studying drugs for breast cancer would get us thinking about menopausal symptoms or rheumatoid arthritis?" muses Dr. Weinshilboum.

"Dick remains a dynamic force in biomedical research," says Dr. Collins. "In September, he was among the principal investigators chosen by NIH to expand the PGRN. There has never been a better time to propel the field of pharmacogenomics. And I'm confident that with creative minds like Dick leading the charge, that acceleration in scientific understanding will soon translate into benefits in the clinic."

This article could not conclude without mentioning Dr. Weinshilboum's nurturing of the next generation of scientists.

"He is the best mentor you could ever have," says Dr. Wang, a former student and postdoctoral fellow. "He does all the things a good mentor does, but he also takes what you say seriously. He sincerely wants to work with you. He respects junior faculty members."

By his own rough estimate, he has officially mentored more than 50 students and fellows in his 38 years at Mayo, and he clearly believes them to be his most significant legacy.

"The future of the science is in the bones of these brilliant young people: It's in their DNA," he explains. "We try to help all of them, the basic researchers and the clinicians alike, because they all need an environment that allows them to improve the health of our patients over the next 20 years."