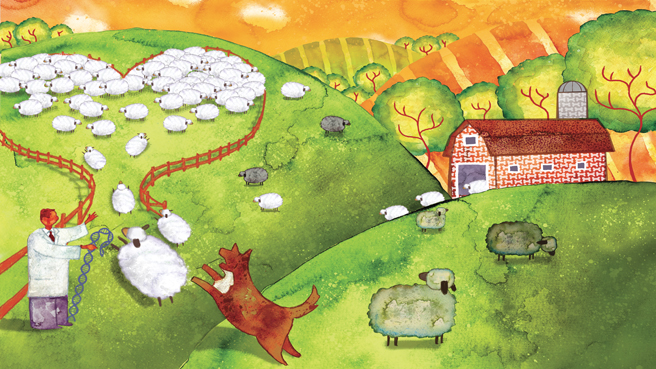 Miroslav Dlacic's heart attack changed his life drastically — and seemingly forever. His damaged heart made him too tired to work in his garden or to spend much time at his leather-accessories workshop in Belgrade, Serbia. Like many patients with heart problems, Dlacic, who is 71, thought he would live his remaining years in a weakened condition.

Then, a groundbreaking Mayo Clinic trial of stem cell therapy to repair damaged heart tissue changed his life again — this time for the better.

Dlacic agreed to participate in the Mayo Clinic stem cell trial through the hospital in Serbia where he is treated. Two years later, Dlacic is able to walk again without becoming worn out.

"It's a paradigm shift," says Andre Terzic, M.D., Ph.D., director of Mayo Clinic's Center for Regenerative Medicine and senior investigator of the stem cell trial. "We are moving from traditional medicine, which addresses the symptoms of disease, to being legitimately able to cure disease."

For decades, treating patients with cardiac disease has typically involved managing heart damage with medication. It's a bit like driving a car without fixing a sluggish engine — you manage the consequences as best you can and learn to live with them.

But in collaboration with European researchers, Mayo Clinic researchers have discovered a novel way to repair a damaged heart — to actually fix the machine.

In Mayo Clinic's breakthrough process, stem cells are harvested from a patient's bone marrow. The stem cells undergo a laboratory treatment that guides them into becoming cardiac cells. The treated cells are then injected into the patient's heart in an effort to grow healthy heart tissue.

The study is the first successful demonstration in people of the feasibility and safety of transforming adult stem cells into cardiac cells, Dr. Terzic says.

This discovery could have implications for millions of people. Cardiovascular disease is the leading cause of death worldwide, according to the World Health Organization. In the U.S. alone, about 5.8 million people have heart failure, and the number is growing, according to the National Institutes of Health.

Beyond heart failure, the Mayo Clinic research also is a milestone in the emerging field of regenerative medicine, which seeks to go beyond palliative treatment to fully heal damaged tissue and organs.

This image shows the process used in the clinical trials to repair damaged hearts. Cardioprogenitor cells is another term for cardiopoietic cells, those that were transformed into cardiac cells.

Transformation: The cardiopoietic cells on the left react to the cardiac environment, cluster together with like cells and form tissue.

Stem cell transplants traditionally have been used successfully to treat diseases such as leukemia and lymphoma. Translating that success to heart disease is a huge challenge.

"In leukemia and lymphoma, the transplanted bone marrow is repairing bone marrow," Dr. Terzic says. "Here, we are asking something unique of the stem cells — to repair another organ. It's an anatomical mismatch."

But Mayo Clinic researchers continued their research, inspired by an intriguing discovery.

In the early 2000s, they analyzed stem cells from 11 patients undergoing heart bypass surgery. The stem cells from two of the patients had an unusually high expression of certain transcription factors — the proteins that control the flow of genetic information between cells. Clinically, the two patients appeared no different from the others, yet their stem cells seemed to show unique capacity for heart repair.

"That gave us the idea to convert nonreparative stem cells to become reparative," Dr. Terzic says.

Doing so required determining precisely how the human heart naturally develops, at a subcellular level. That painstaking work was led by Atta Behfar, M.D., Ph.D., a cardiovascular researcher at Mayo Clinic in Rochester, Minn.

With other members of the Terzic research team, Dr. Behfar identified hundreds of proteins involved in the process of heart development (cardiogenesis). The researchers then set out to identify which of these proteins are essential in driving a stem cell to become a cardiac cell.

Using computer models, they simulated the effects of eliminating proteins one by one from the process of heart development. That method yielded about 25 proteins. The team then pared that number down to 8 proteins that their data indicated were essential.

The research team was then able to develop the lab procedure that guides stem cells to become heart cells. The treated stem cells were dubbed cardiopoietic, or heart creative.

A proof of principle study about guided cardiopoiesis, whose results were published in the Journal of the American College of Cardiology in 2010, demonstrated that animal models with heart disease that had been injected with caridiopoietic cells had improved heart function compared with animals injected with untreated stem cells.

Hailed as "landmark work," by the journal's editorial writer, the study showed it was indeed possible to teach stem cells to become cardiac cells.

From the lab to European clinical trials

In regenerative medicine, the step between lab tests and clinical trials is a big one.

For one thing, the amount of stem cells must be greatly expanded. The researchers also need to find a partner with expertise in managing the increased production of stem cells and the logistics of clinical trials.

"The interaction with Cardio3 was crucial to driving Mayo Clinic's technology forward," he says.

Why European trials first? It's faster to get many clinical studies approved in Europe compared with the United States. Trials will be held in the U.S. eventually, but Dr. Terzic had many previous collaborators at European medical centers ready to collaborate. And Cardio3 had a long history of coordinating trials in multiple countries.

The clinical trials involved 45 patients in Belgium, Switzerland and Serbia. All of the patients, including Miroslav Dlacic, experienced heart failure as a result of heart attacks.

The results were significant. Stem cells from each patient in the cardiopoiesis group were successfully guided to become cardiac cells. The treated cells were injected into the heart wall of each of those patients without apparent complications.

"It's critical that this new process of cardiopoiesis was achieved in 100 percent of cases, with a very good safety profile," Dr. Terzic says. "We have demonstrated the feasibility and safety of this procedure."

Although this initial clinical trial wasn't designed to assess the procedure's effectiveness, the indications were positive, researchers said.

Typically, failing hearts pump less blood and become enlarged. Six months after stem cell therapy, every patient in the cardiopoiesis group had increased blood flow from the heart to the rest of the body. And each patient showed decreased heart volume, all indicators of improved heart health.

The patients also were able to walk longer distances than they could before treatment — on average. By comparison, the 10 patients in the control group showed no change or even deterioration in these measures.

"This preliminary study was not designed to be definitive. But already at six months, there was a significant benefit for patients," Dr. Terzic says.

He notes that anecdotal evidence of improvement over the study's two-year follow-up period came from a patient who was unable to summon sufficient breath to play his trumpet before the experimental treatment but now can do so, and from another who has resumed riding a bicycle.

"We are enabling the heart to regain its initial structure and function," Dr. Terzic says, "and we will not stop here."

The clinical trial findings are expected to be published in the Journal of the American College of Cardiology in 2013.

Meanwhile, research to improve the injection process and cell effectiveness is underway.

"We are working on novel delivery tools that dramatically increase the cardiopoiresis cells retained by the heart," Dr. Behfar says. "We have technology and know-how about these stem cells that we couldn't even have dreamed of 10 years ago when this work began."

Multicenter, phase III clinical trials are being planned for larger groups in Europe, to be followed by trials in the U.S. Much more information is needed before this technique can be validated and approved for regular clinical use, though.

Mayo Clinic is uniquely positioned to pursue this complex therapy. In addition to its global reach, its Center for Regenerative Medicine is at the forefront of efforts to develop reparative solutions for a range of conditions besides heart disease.

The interdisciplinary collaboration that provides the foundation for the Center for Regenerative Medicine epitomizes Mayo Clinic's approach to research and treatment. So, too, does a commitment to using talent and technology to enhance patient care.

"The Mayo history of being an unbelievable medical and scientific center is the reason I am here," Dr. Terzic says. "We have extremely creative people here as well as the environment that allows them to develop definitive solutions to problems."