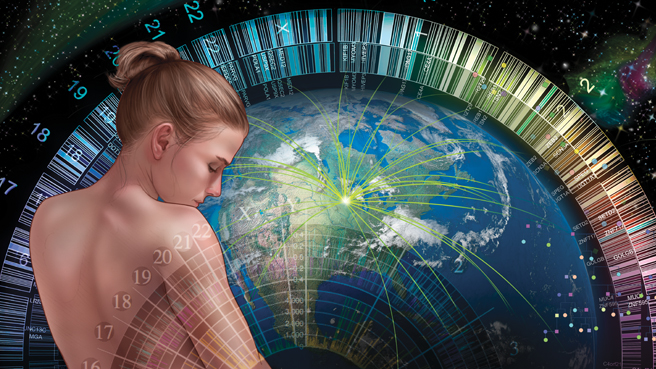 When a woman undergoes testing for the most common breast cancer genes, BRCA1 and BRCA2, it is usually because she wants to know if she will develop breast cancer. However, since mutations in these genes account for just a small fraction of all breast cancers, a negative test result doesn't mean she is in the clear. Likewise, testing positive doesn't presage a future tumor.

While it's true that certain specific genetic alterations could result in a 65 percent chance of developing breast cancer during one's lifetime, other alterations could be absolutely meaningless. With such a wide range of possible outcomes, the decision of whether or not to endure a prophylactic mastectomy can seem more like gambling than medicine.

But the innovative research of geneticist Fergus J. Couch, Ph.D., of Mayo Clinic in Rochester, Minn., who is combining family history data with laboratory techniques, is giving women the genetic information they need to make crucial personal health decisions.

Dr. Couch, who cut his teeth as a postdoctoral fellow in the laboratory of geneticist Francis S. Collins, M.D., Ph.D., now director of the National Institutes of Health, is widely regarded as one of the international leaders in the genomics of breast cancer. In the early 1990s, Dr. Couch was involved in the initial characterization of the BRCA1 gene and helped discover the full-length BRCA2 gene. In 1997, he came to Mayo Clinic and continues to study these two genes, with renewed emphasis on the clinical implications of his findings.

"You can imagine this information will be useful for developing risk models in the future," Dr. Couch explains, "because it is all about risk and individualization of risk. Rather than giving a woman some number that really just represents the average risk of disease, we want to be able to give her a risk that takes into account her specific environmental and genetic influences."

As Dr. Couch explains it, two women with the same high-risk mutation in a breast cancer gene — and thus the same 65 percent lifetime risk of breast cancer — could, in fact, have very different outcomes. Depending on how the other 20,000-odd genes in her genome might be acting in the background, one woman may develop breast cancer at an earlier age, and the other might not ever get it.

Eager to identify the genetic factors that modify the effects of the BRCA1 and BRCA2 genes, Dr. Couch teamed up with colleagues from around the world to form the Consortium of Investigators of Modifiers of BRCA1/2. This international team is using genomewide scans to identify genetic variants (single-gene polymorphisms) that could explain the great variability in risk between individuals.

So far, the consortium has tested DNA from 17,000 BRCA1 mutation carriers and 9,000 BRCA2 mutation carriers. For his part, Dr. Couch has already uncovered a number of modifiers that can take that average risk of 65 percent up to as high as 90 percent or down to as low as 30 percent.

"If you find people at super-high risk, they may very quickly decide to do prophylactic surgery, but if you find people at a lower risk, they may decide to delay or even forgo that mastectomy," Dr. Couch says. "So it has real clinical implications. Now we have to improve on this model so that it can be brought to the clinic to help women understand what their risk is and to make more-informed clinical decisions."

Known predisposition genes account for 45 percent of all familial breast cancer. The other 55 percent are unexplained. The pie chart shows the proportion of cases accounted for by genes known to contain mutations that predispose to breast cancer and by common genetic risk factors (common SNPs).

Through another international consortium, Dr. Couch is looking for the causes of sporadic breast cancer, when the disease appears seemingly at random and with no apparent genetic cause. The endeavor, called the Breast Cancer Association Consortium, has studied 100,000 sporadic cases, pinpointing 60 different regions of the genome that increase the risk of breast cancer.

"The interesting thing about these particular markers is that we do not see some of them in the other forms of breast cancer, so they may be unique to triple negative breast cancers," Dr. Couch says. "Remember, we are looking at mutations present in every cell in the body, not just the tumor. So at the very basic blood level there are factors that specifically predispose you to triple-negative breast cancer."

Dr. Couch's quest to uncover the causes of many different forms of breast cancer has led him from the laboratory to the clinic and back again. His work at the bench has demonstrated that BRCA2, a known DNA repair gene, has an important role in cell division.

This novel function may help to explain why BRCA2 mutant breast tumors have high levels of genome instability. For instance, many breast cancer tumors either lose or gain big chunks of the genome, including a section of chromosome 17. Dr. Couch began to wonder if having extra copies of the genes within that region might actually be driving cancer.

His laboratory genetically engineered a series of mice to contain more than the usual dose of these genes in the mammary gland. Two of these juiced-up genes caused breast cancer in the mutant mice. When researchers compared their results to tumors from breast cancer patients, they found that the activity levels of these same two genes were highest in patients with poor outcomes. Dr. Couch now believes they have found two novel breast cancer genes, and he is back in the lab trying to understand how they are involved in cancer metastasis and progression.

"It was interesting to take what we had found in human tumors, put it into mice, find the specific gene responsible, and then we take it back around and show that it does make sense with regard to the outcome and progression of patients," Dr. Couch says. "We just have to figure out how it all works, and how it fits into the overall picture of a woman's risk. That is all in the future."

For 1 out of every 10 women tested for breast cancer gene mutations, the findings are even more uncertain. Ten percent of test results reveal a change in the BRCA1 or BRCA2 genes, yet whether or not that genetic alteration will lead to cancer is not known.

In 2009, Dr. Couch launched another international consortium to determine which of these genetic changes, called variants of uncertain significance, are background genetic noise and which are harbingers of disease. This new consortium is combining family history studies with molecular biology to calculate the odds that a particular mutation is causing disease.

Today, this consortium includes 100 scientists and physician-researchers from 17 countries. It meets twice a year to share family information, functional data and new ideas for cataloguing the more than 2,000 variants of uncertain significance identified so far.

"What Dr. Couch has done is bring together people globally to accomplish things that no one institution could do on its own," says James N. Ingle, M.D., the Betty J. Foust, M.D., and Parents’ Professor at Mayo Clinic, and director of Mayo Clinic's Breast Cancer SPORE, which funds the new consortium. "One of the important parts of his work is the translation of this information so that no matter where in the world a woman is being seen, she knows whether her mutation is a bad result or a neutral result. The whole point of this is to bring advantage to the patient, who, in turn, could avoid these substantial prophylactic surgeries and also perhaps worry a little bit less about cancer."

BRCA1 and BRCA2 are by far the most common breast cancer-predisposing genes, yet they only account for 5 to 10 percent of all breast cancers, and less than half of all familial cases. So it is not surprising that Dr. Couch is also interested in discovering other breast cancer genes and risk factors.

He is going back to families whose members have breast cancer not explained by BRCA1 and BRCA2 mutations and sequencing their genes to look for genetic changes that track with disease. The research is in collaboration with the University of Delaware and City of Hope Comprehensive Cancer Center in California, but Dr. Couch is hoping to extend it across international lines and recently met with investigators from 20 research groups from around the world.