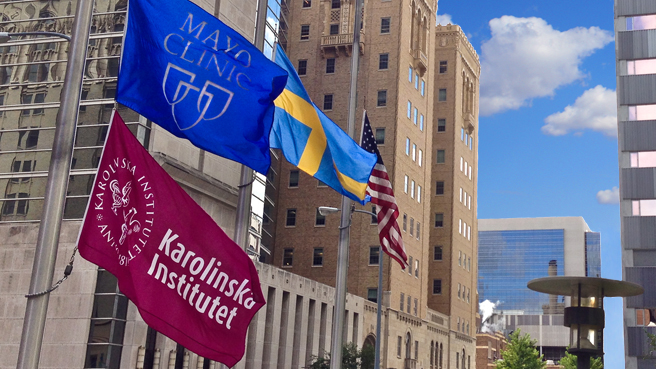 If ever scientists were looking for a poster-man to dispel the myth of the reclusive mad scientist, Sreekumaran Nair, M.D., Mayo Clinic endocrinologist, would certainly top the list. This year marks the 21st year of institutional collaboration between Mayo Clinic and Karolinska Institutet, a relationship that began in the early '90s with Dr. Nair and his Karolinska colleague John Wahren, M.D., Ph.D.

This collaboration brings together two influential institutions in the scientific and medical fields: Mayo Clinic is a paragon of excellence in healthcare; Karolinska Institutet is a premier research institution, though perhaps most famously known

for its role in awarding Nobel Prizes. These two leaders came together at a scientific conference in Burlington, Vermont. Both Dr. Nair and Dr. Wahren were asking similar questions in the field of metabolism, and they hit it off right way.

Dr. Nair spent the following year at the Karolinska Institutet, working in Dr. Wahren’s lab. But science was not all Dr. Nair worked on in Sweden—he was recruiting. The next year, a few more scientists became a part of the exchange and voyaged across the Atlantic to visit Mayo Clinic. “One of the keys here is strong personal interactions from the very beginning,” says Eric Wieben, Ph.D, co-chair of the Mayo Clinic-Karolinska Institutet steering committee and director of Mayo's office of external research collaborations. Within just a few years, the collaboration numbered almost 30 investigators.

Today, it involves over 500 investigators — almost enough to fill a Boeing 747. “It’s not just one or two investigators driving this process, it’s a whole network of investigators, in all kinds of disciplines,” says Martin Schalling M.D., Ph.D., co-chair of the Mayo Clinic-Karolinksa Institutet steering committee as well as academic coordinator of the Karolinska Institutet collaborations with Mayo Clinic. What started as collaboration in the field of diabetes and metabolism has now grown to encompass nearly every medically relevant

field of biological study and has produced more than 300 collaborative papers. This year, ten collaborative project grants were awarded in areas spanning from heart disease to schizophrenia, ovarian cancer to depression, hepatitis vaccines for preventing cancer to antibiotic resistant bacteria. Travel grants are also awarded to allow investigators to travel between labs to learn new techniques, and exchange best practices. In past years, these grant awards have been used to fund activities such as observation of Mayo Clinic’s Procedural Skills Laboratory to generate ideas for the structure of Karolinska University Hospital’s own teaching environment, and research on environmental factors associated with celiac disease.

Govindarajan Rajagopalan, Ph.D, a Mayo Clinic immunologist, is part of a group awarded a 2015 collaborative grant. He studies a type of toxin called superantigens, produced by the bacteria Staphylococcus aureus.

“S. auerus is a common and serious cause of pneumonia, both in the community and in hospitals, especially for people in the ICU-- when they are on ventilators it can be a real problem.” Dr. Rajagopalan first heard about the collaboration through an email calling for grant applications: “There was one investigator, Anna Norrby-Teglund. I had seen her papers before, and so when I saw this opportunity I thought I should contact her and see what we can do. She responded promptly, she was very interested.” Anna Norrby-Teglund, Ph.D, Professor of Medical Microbial Pathogensis at Karolinska Institutet, and her colleagues in India had isolated a highly pathogenic strain of S. aureus that was spreading rapidly though Asia and coming into Europe.

“This strain is unique because it produces a large amount of toxin. One of the hypotheses for why the strain is spreading rapidly and causing serious disease is because of the large amount of toxin it produces,” notes Dr. Rajagopalan. Through this collaborative grant the collaborators are studying the role of the toxin in disease spread, and investigating methods to neutralize or block this toxin using a humanized mouse model developed at Mayo.

Not all of the collaborations between these institutions are scientific, either. From the start of the relationship, top leadership at both institutions have supported and encouraged this collaboration to extend beyond individual scientists to become a tool for developing the entire institution. In December of 2011, a memorandum of understanding was signed by the two institutions formalizing their relationship. This agreement also expanded work into areas of administration and education. To this end, a new grant category was introduced for administrative collaborations in 2015. “We decided to make it a separate category to highlight the fact that we want our two administrative departments to work as closely as possible. We think that is a prerequisite for a large strategic organization like this to work long term,” Dr. Schalling said in his announcement.

In September, the Karolinska Institutet hosted the 21st Annual Scientific Research Meeting. The meeting spanned 2 full days, including 14 breakout sessions along with guided tours of the new Karolinska University Hospital. Next year’s conference will be hosted in Rochester, by Mayo Clinic.